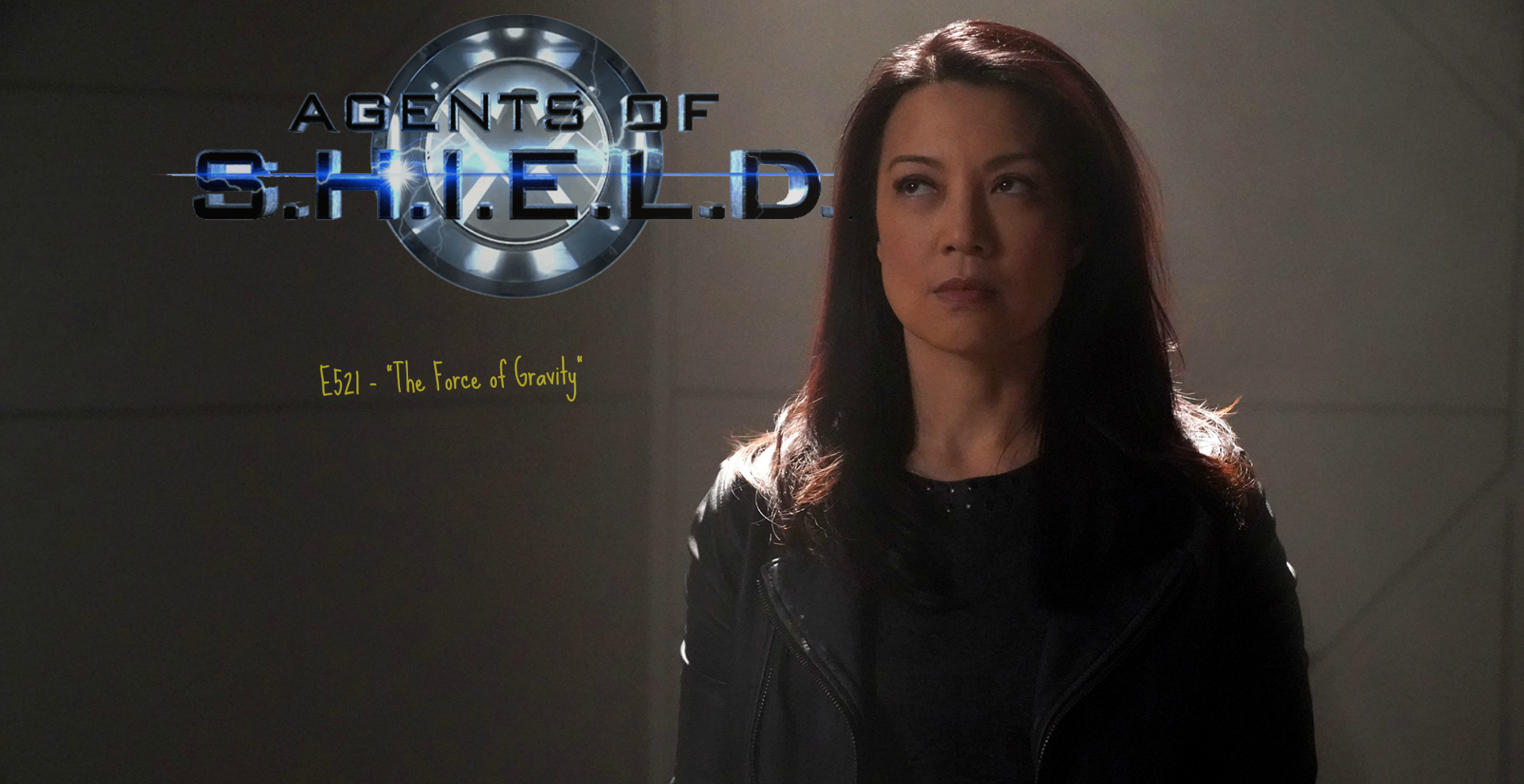 The end is near. SHIELD has been trying to figure out how they can change Earth’s doomed future while also dealing with an alien invasion. Despite everything they’ve been doing, it seems the future events are fixed. With the team split, time is running out to save the day. At the same time, the events from Avengers: Infinity War are beginning to leave their mark.

Warning: There will definitely be spoilers for Season 5, Episode 21 of Marvel’s Agents of SHIELD, “The Force of Gravity,” below. 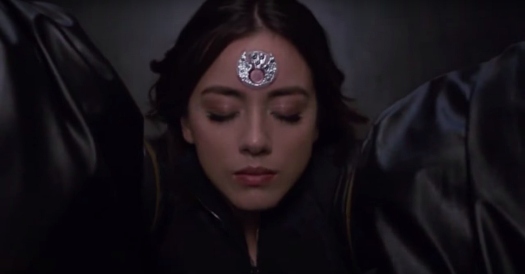 After Daisy, Coulson, and May were declared prisoners of war by the Gravitonium-powered Talbot, Daisy is dragged away by alien guards. She wakes up in the alien meeting room with Taryan, the master of the house of Kasius. He tells her Inhumans deserve to be treated better. He wants to make her his disciple. He knows what she’s going through since his way of thinking doesn’t line up with that of his people. He knows what’s it’s like to be on the outside. She will be going with him willingly or not.

Daisy chooses “not” and tries to quake-blast him. Her powers aren’t working. Taryan informs her she’s not conscious yet. She’s being brought to him. Her fate is sealed, and he knows her future. Daisy thinks it’s funny because she knows his future and the fate of his two “despicable sons with worse make-up” than him. She tells him she’s the Destroyer of Worlds. Trying to use her powers again, she manages to crack the device on her forehead in the real world and takes out the the three alien guards dragging her.

Coulson and May are locked in the same cell. Talking about Talbot, Coulson blames himself for the turn of events. Despite being stuck in the future, he feels responsible for not saving Talbot from Hale’s custody and brainwashing. Talbot put himself in the HYDRA chamber without being asked in order to save them. They still have to try to return the favor.

Coulson uses his hand to probe the room for a way out. Once he finds where the control panel should be, he makes a move to punch through, but the door opens. Deke left the Zephyr-One after it was attacked by aliens and Talbot. Deke managed to find them on the prison level.

Roaming the alien ship’s hallways, they’re not sure where to go. Turning the wrong way, they come across more alien guards. May prepares to fight the aliens, but they’re blasted away by Daisy.

Talbot takes a quinjet from the Zephyr-One and uses his powers to fly it back to Earth. His first stop is to check on Creel in the hospital. Talbot tells him he wants to help him. He knows how to stop the voices from the Gravitonium. Raising his hand, he asks Creel to join him. When they touch, Creel irons up and starts to feel relief. Then Talbot absorbs him. This makes him more powerful.

Next he visits his wife and son to tell them he’s a superhero now–like the Avengers. He tells George he can fly too and doesn’t need a hammer or iron suit. Carla wants to talk to him alone. SHIELD called about the accident with the chamber. Talbot slams her against the wall. When George pleads for him to put her down, Talbot says she’s not on their side since she worked with Hale to brainwash him.

Talbot is about to absorb Carla when SHIELD arrives outside. He uses his powers to lift their cars and slam them down. Mack, Yo-Yo, and other agents start shooting, but Talbot catches them before they hit their mark. He then sends them flying back at the agents. Talbot exclaims he’s a superhero and is doing what needs to be done. George yells out that he’s not a hero. He’s the bad one that only wants to hurt the others. Talbot tells his son he just needs more fuel and to keep watching the news. He flies away.

Qovas Gets A Wake Up Call

Qovas told Coulson there were several missiles pointed towards the Lighthouse. This causes the team to split up. May and Deke stay on the warship while Coulson, Daisy, and Agent Davis take the Zephyr-One back to Earth. Coulson refuses, but May gives him the order to leave. Just then, alien find them and use their “primitive” weapons against them. Coulson grabs May, turns on his holographic shield on his arm, and gives May a passionate kiss. Daisy is surprised, but takes out the aliens. Coulson figures the kiss would shut May up. He also gives Daisy an order not to say a word. She replies, “Copy that, Hot Lips.”

Deke has to help May change the course of the missiles because he managed to learn a tiny bit of the Kree language while growing up in the Lighthouse in the future (he knows how to count to five, plus he also knows zero). Qovas arrives in the control room as Deke tries to figure out all the different computer panels. Of course this means it’s time for May and Qovas to fight.

The fight goes on, but Qovas manages to fire the missiles. His look of delight soon fades as they turn around and head back towards the ship. Deke and May use the teleporter to return to the Lighthouse moments before the ship explodes.

A Decision to Make

On the way back to the Lighthouse, Coulson passes out after Daisy notices a cut on his arm is still bleeding profusely after she patched it up. They get him straight to the med bay, and Simmons informs them he’s not going to die–yet. His condition is getting worse more quickly.

Earlier Fitz and Simmons figured they could probably get the Centipede serum to work and use it to deliver Jiaying’s healing DNA into Coulson’s system. They also figured it could be used to put a permanent stop to Talbot, if it comes to it. They could use the Centipede device to deliver Odium straight into his system.

When these two solutions are mentioned, Daisy quickly informs them that they can’t do both. The Centipede device they have is the last one. They have to either save Coulson or stop Talbot.

Meanwhile, Talbot managed to abduct Robin and her mom. He asks Robin if she ever had a vision of him tearing Earth apart and bringing something up from the ground? She nods and he says, “Good, now tell me where.”

There was a lot of action this week. Having the team split up has made things interesting and has given the show a bigger feel. It also made the reunion more meaningful. Talbot is proving to be a formidable foe. He has become too powerful, and it looks like SHIELD may have to take him out. If they do, this means they won’t be able to save Coulson. Yo-Yo’s future self said trying to save Coulson is what dooms the planet. It would be great to have Talbot survive so he could return as a villain later. Although the show still hasn’t been renewed.

One episode left, and we don’t know the show’s fate. ABC has announced other shows that have been canceled (including Inhumans) along with shows that are returning. Perhaps they’re waiting to see how these last few shows perform to determine if they feel it’s worth continuing.

There wasn’t too much of a connection this week. Mack was watching reports of “Destruction and Panic in New York.” Talbot also mentioned the Avengers a few times. It seems as if the show still hasn’t caught up to the movie’s ending timeline. I still think that Coulson will survive only to have the after-affects of Thanos’ use of the Infinity Gauntlet take May away from Phil. Perhaps next week’s season finale (I don’t want to say ‘series’), will show other agents disappearing as well.

2 Replies to “Agents Of SHIELD Season 5, Episode 21 “The Force Of Gravity” Recap And Review”