Best Reason Not To Go On Vacation With Deadpool

Master Matrix still has a lot to learn about how life works. When he asks “What is love?” Peter couldn’t help but think of the 1993 hit by Haddaway. Of course Deadpool has the song on his smart phone and starts blasting it while singing along.

Best Way To Lure A Supervillain Into A Trap

Harley Quinn is trying to collect a bounty for killing Lord Death Man. She set up a trap in the city by using a bouncy house. His henchmen realize it’s a trap, but Lord Death Man insists on going inside. You won’t believe what happens next! (Buy the comic to see the rest of Harley’s wacky deathtrap).

Best Depiction Of A Burning Sensation

Even cosmic-powered Ghost Riders have to pee. When they do, you can imagine it must be a burning sensation.

Best Way To Win A Bet 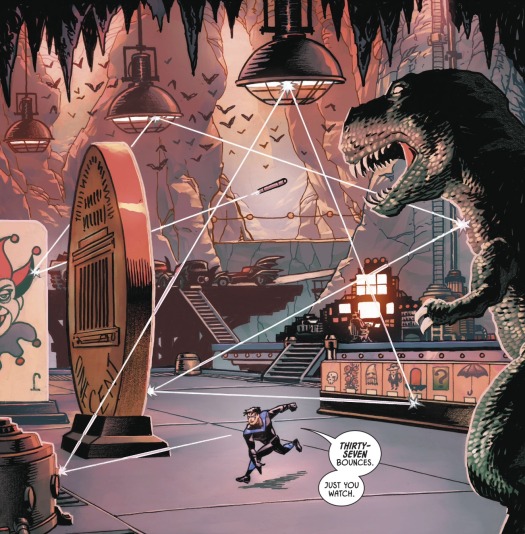 Nightwing is trying to lighten Batman’s spirits after his recent heartbreak. Even though Batman refuses to bet, Dick Grayson bets him a penny he can bounce his baton 37 times. You can imagine what sort of penny he might ask for if he accomplishes the feat.

Best Reminder Against Texting While Flying

Negasonic Teenage Warhead is always texting on her phone. Not only is she using it while flying the X-Men’s Blackbird, she’s also texting while piloting the thing. Perhaps one of her mutant abilities is to be able to text and do other things at the same time.

Nightwing is participating in a crazy and dangerous race. While he’s inner-monologuing, he makes a reference to the race being a cliffhanger…

Best Reason To Travel Through The Microverse

Ant-Man and the Wasp are trying to make their way back home. As they travel through the Microverse, they see many strange places, including one inhabited by heroic corgis wearing suits while shooting lasers out of their eyes. Who wouldn’t want to see that?

Best Reminder Being A Bully Isn’t A Good Idea 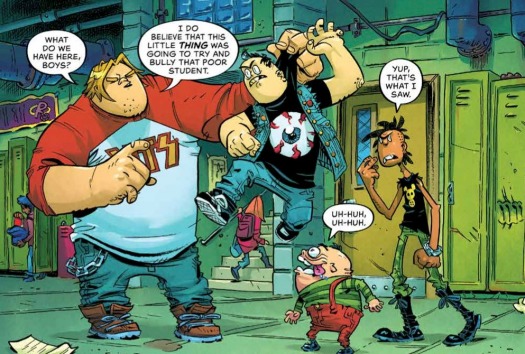 In the first issue of Bully Wars, we meet Rufus Ruffhouse, a pretty despicable bully. On the first day of high school, it turns out there are bullies bigger than he is. Looks like the day isn’t going to go quite as he imagined. 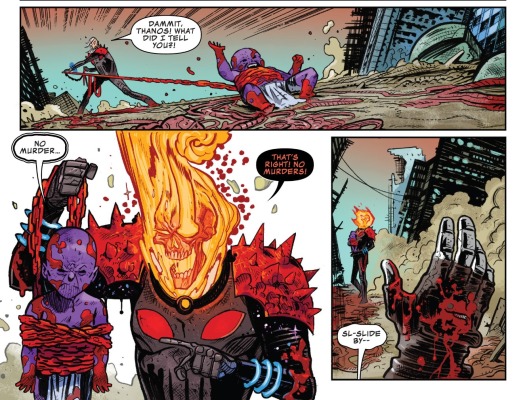 Frank Castle, aka Cosmic Ghost Rider, went back in time and is trying to raise Baby Thanos properly so he doesn’t become a murderous cosmic threat. He’s not having the best of luck and has to keep reminding him not to murder people.

Best Example Why Time Traveling Can Mess Things Up

A strange futuristic version of Cable and his Guardians of the Galaxy have been trying to stop Cosmic Ghost Rider from raising Baby Thanos. Cable keeps telling him he’s making a mistake. Suddenly, a grown up version of the Thanos Cosmic Ghost Rider raised shows up. Things are about to get messy.