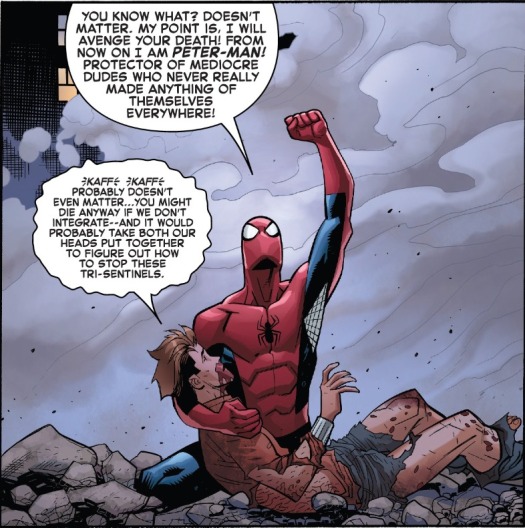 Peter Parker and Spider-Man have been separated (it’s kind of a long story). Spider-Man is now acting without the responsibility that he used. This caused Peter to get hurt. Spider-Man then decides to honor the injured Peter by changing his name to Peter-Man. Thankfully, this doesn’t actually stick.

Best New Sitcom Based On Mutants 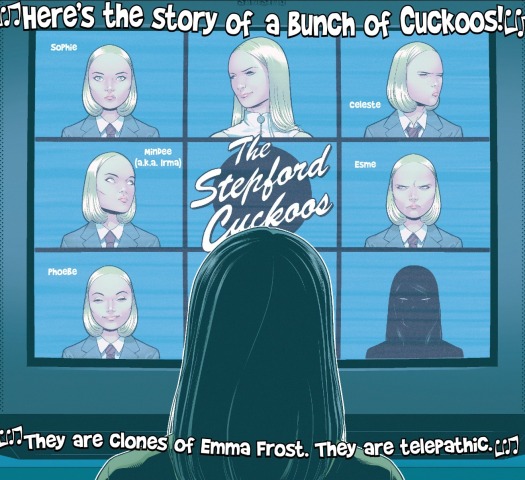 Anyone else interested in a Brady Bunch type featuring the Stepford Cuckoos? They seem to have some strange ideas when trying to keep subdued foes restrained. 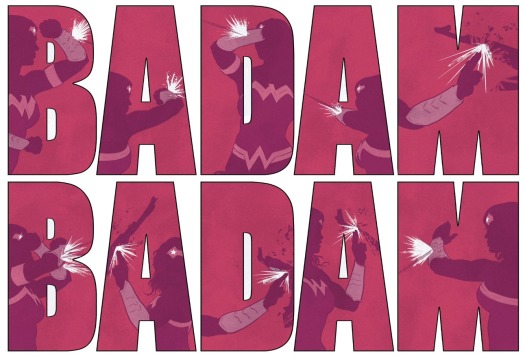 Some people never learn. It just seems like it’d be common sense that you won’t be able to shoot Wonder Woman. Still, it’s cool to see her deflect the bullets.

Best Alternative To Being A Superhero 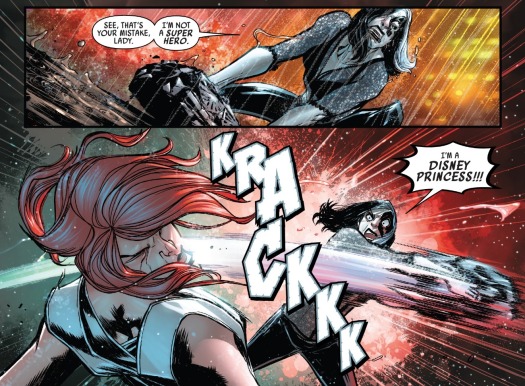 Domino is fighting a foe and is called a superhero. She makes it clear that is not the case. She is not a superhero; she’s a Disney Princess apparently. She may not be royalty but, it works for me. 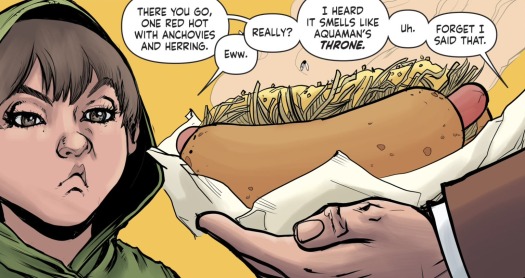 Plastic Man buys a hot dog for a kid he’s been watching over. His choice of toppings are questionable, but he mentions this is supposedly what Aquaman’s throne smells like. I don’t think we ever need to find out if this is really the case.

Best Reason To Check The Door Before Crashing Through A Window 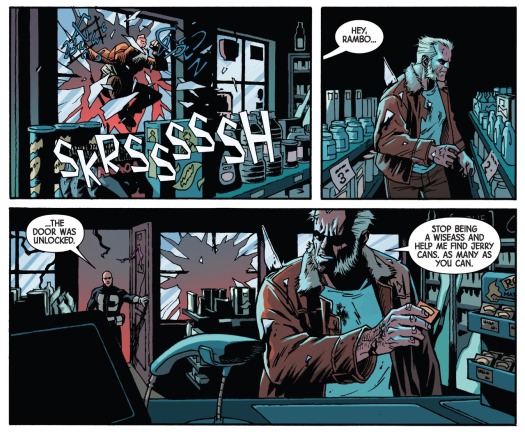 Wolverine may be the best there is at what he does, but apparently that does not include checking to see if a door is unlocked. He simply busted through the window. Puck gives him a hard time about it. 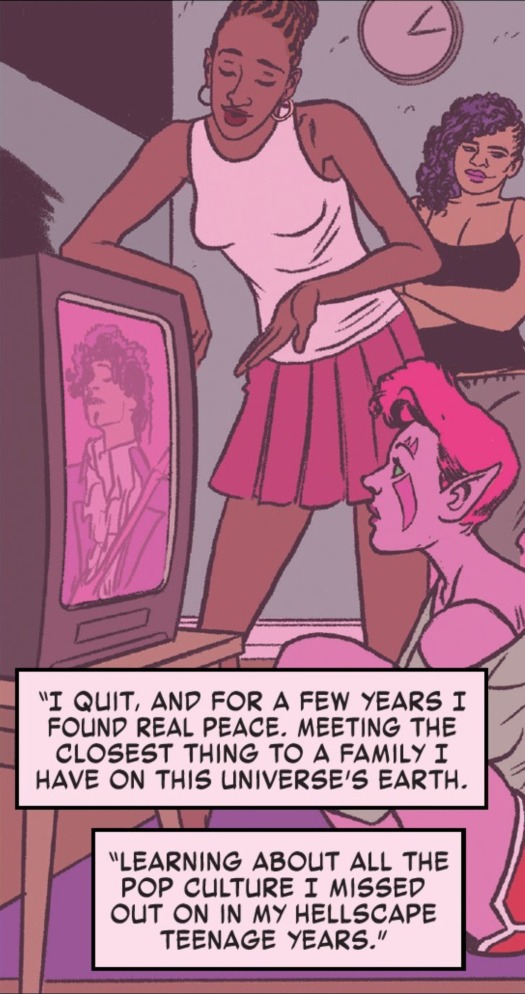 During a flashback moment, we see Blink watching Prince on TV as she learns about all the pop culture things she missed. You can’t go wrong with Prince’s music.

Red Hood And The Outlaws #26

Most Questionable Accessory For Jason Todd 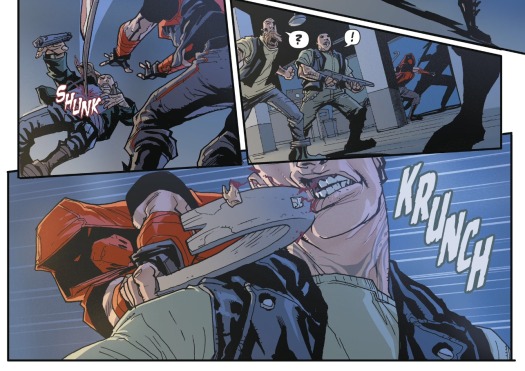 Jason Todd, aka Red Hood, has had a makeover. One of the things he now carries is a crowbar. It seems a little weird considering Joker pretty much killed him with one before he blew up in a building. Perhaps this is a way for Jason to deal with any still lingering urges of aggression over getting killed. I think we can all agree getting killed would suck.

Best Reason To Pack Your Own Lunch

Chase Stein is fighting some creatures that showed up alongside the rest of the Runaways. He mentions knuckle sandwiches for the creatures lunch. Depending on the topping, I can’t imagine they’d be too tasty. 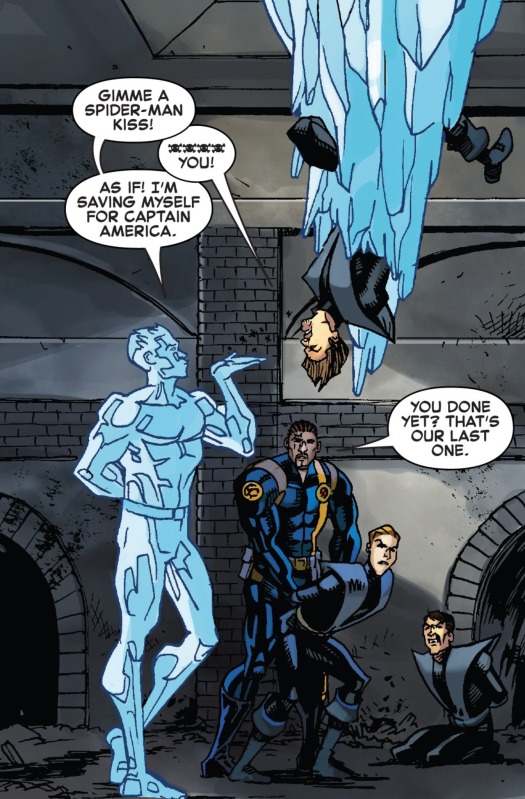 Iceman and Bishop apprehend some mutant-hating bad guys. Iceman asks for a Spider-Man Kiss when his foe is captured upside-down. We also finds out who Bobby is saving himself for.

Best Lesson On The True Meaning Of Halloween 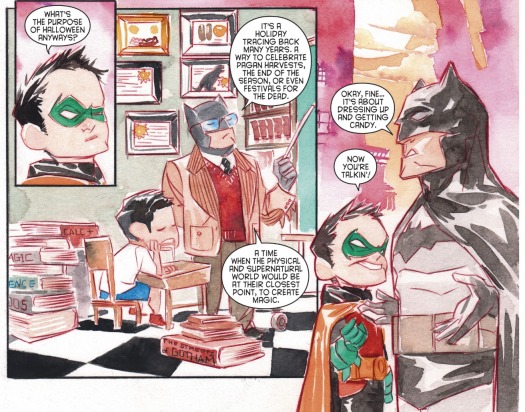 Yes, this comic was originally published back in 2012, but DC re-issued it for Batman Day. It’s such a great comic that it deserves the attention.

Because of he was raised in the League of Assassins, Damian doesn’t understand what Halloween is or what it’s about. [Professor] Batman gives him a little history lesson, but then cuts to the chase as to what it’s really about.

A ghost librarian has taken away all sound from New York City. Squirrel Girl goes to a library to get information about ghosts. She finds a book called The “Science” of Ghosts and discovers what ghosts hate and love.

One Reply to “Best Stuff In Comics This Week”