Many comic readers are familiar with that epic moment in the classic Amazing Spider-Man #33 from 1965. Spider-Man was trapped and the life of Aunt May hung in the balance. This is a moment that was paid homage to in the current Spider-Man PS4 game, Spider-Man Homecoming, and many other comics.

In this What If? story, Flash Thompson became Spider-Man and goes through a similar moment. It’s a classic homage that never gets old.

Best Look Back At A Classic Costume

Harley Quinn is looking through her closet and comes across her old costume. She still has some love for the outfit. Her visiting mom isn’t a fan because it reminds her of the time she was hanging around Joker.

Best Look Back At A Classic Meme 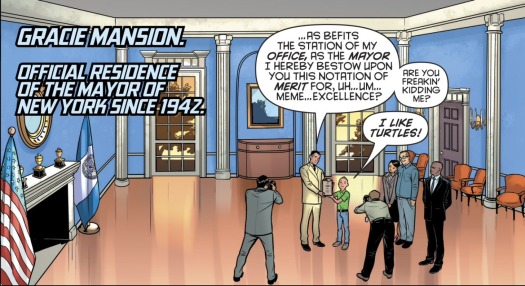 In the same issue, we see there’s an award being given for Meme Excellence at the Mayor’s office, for some reason. It’s the “I like turtles” kid. Obviously he wouldn’t be a kid anymore. I wonder what he’s up to now. Is writer Sam Humphries really the “I like turtles” kid? (Actually, I believe he became a YouTube gamer for a bit. Not sure if he’s still doing that.)

Worst Place For Frank Castle To Be

Frank Castle has become Cosmic Ghost Rider in the far-off future. He decided to make amends for things by going back in time and killing baby Thanos. He couldn’t bring himself to do it so, instead, decided to raise him properly. This ended up creating an alternate version of Thanos. Frank now finds himself in between the two different Thanoses. Or should that be Thani?

Deathstroke appears to have ended up in Arkham Asylum and forced to go through virtual therapy sessions. One fellow inmate starts talking about random things and references the “Wakanda Forever” gesture.

Deadpool makes a comment that, as mentioned in the comic, might be too dated for some people. When deciding he has to give an elderly woman a pep talk to help her win a mall-walking marathon he’s betting on, he says he’s going to give her a Coach Taylor talk, referencing the television show, Friday Night Lights. Clear eyes, full hearts, can’t lose, right?

Best Reason Not To Have Batman As Your Fitness Instructor 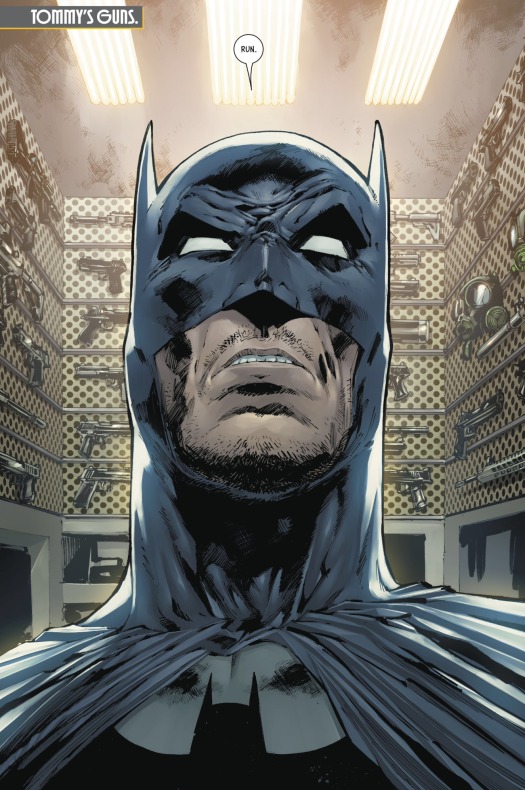 Batman is in search of the person that shot Nightwing in the head last issue. He visits the gunshop where KGBeast purchased guns quickly. He tells the owner to run, only so he can have an excuse to continue to give him a beating. Regardless, if Batman says “run,” you run.

Tony Stark has made a lot of different versions of his armor over the years. He’s constantly upgrading his suit and has different ones for whatever situation may come up. He now has one that actually transforms into a Vespa.

It wouldn’t make sense for his to walk around town in his Iron Man armor. This way, he can cruise around, and if something comes up, he’ll be ready.

Dead Rabbit was a thief who was active in the 90s and retired after a big score. A news retrospective recounts his exploits and seems to be glorifying the time. Martin Dobbs recalls the time differently and is, unfortunately, getting pulled back into the life. 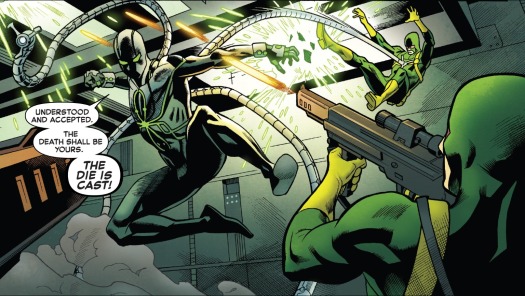 Doc Ock has upgraded himself (and his body) into the Superior Octopus. Just as when he was the Superior Spider-Man, he still shouts, “The die is cast!” when jumping into a battle. I get what he’s saying and why he’s saying it. It just seems weird that he keeps saying it, especially if he wants to try to keep his new identity separate from his past ones.

Best Use Of A Coffee Mug 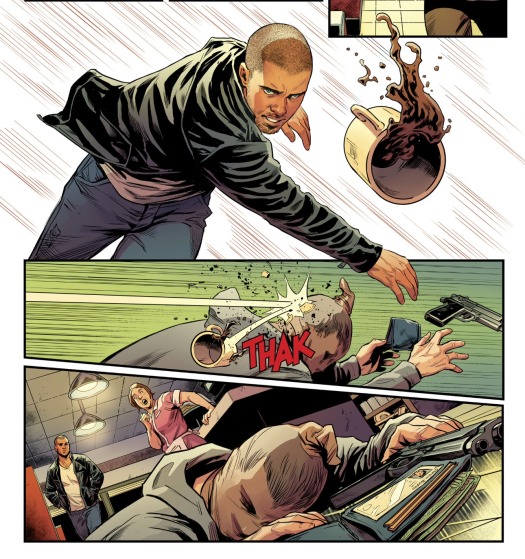 Dick Grayson may have been shot in the head and is suffering from some memory loss, but it seems he still has some of his skills intact. While eating at a diner, a guy comes in to rob the place. Dick, or Rick as he appears to be going by, hands over his wallet to appease the guy. As he makes his exit, he beams the guy with precision in the head with his coffee mug.

Gamora, as Requiem, has merged half the Marvel Universe with the other half. One combination was Man-Thing and Fin Fang Foom. The result? Man-Thing Thang Thoom. It’s equal parts awesomeness and horror.

Best Reason Batman’s Branding Has To Be Kept In Check 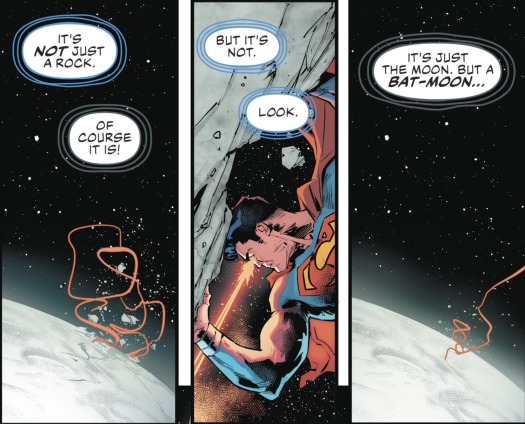 The moon was destroyed in the first issue of Justice League. It’s a crazy thought. The League is finally getting around to doing something about it. Actually, Superman takes it upon himself to put the moon back together, piece by piece. Batman, always seeing the greater opportunity, wants to do more with the moon. He sees the chance to transform it into something to be used in the fight against evil. Superman shoots down the idea of a Bat-Moon. Perhaps it’s for the best.

Similar to Iron Man, Spider-Man has had a large number of different looks over the years. If you’ve been playing Spider-Man PS4, you’ve been reminded of some of the different costumes he’s had. While the one seen in this issue may not have practical fighting uses, it does make him look pretty smooth. It’s just unfortunate it’s something he’s seeing in his mind since Typhoid Mary is manipulating his thinking.

One Reply to “Best Stuff In Comics This Week”