Best Reason To Keep Your Weapons By Your Bedside

When you’re a superhero and your headquarters are pretty much known to the public, it’s a good idea to keep your gear next to your bed. You never know when a former teammate might be brainwashed and transformed into a fifty-foot giant determined to pluck you from your slumber. It might also be a good idea to make sure you’re wearing clean and appropriate sleeping garments.

Clint Barton may be a great superhero, but he’s not the most wholesome person in the Avengers. He has a tendency to get around in the romance department. He even has disturbing dreams about women.

Best Example Of Math Being Used Outside The Classroom

What does Mr. Terrific do when he’s a little nervous? He recites Math equations in his head. And you thought you’d never have a need for the stuff you learned in Math class.

In the far-off future, Old Man Hawkeye is trying to get revenge against the members of the Thunderbolts who betrayed the Avengers to the Red Skull and other villains. He and Kate Bishop find what remains of Moonstone.

Despite Kate having known Clint for years at this point, even she can’t keep track of all the relationships Clint has had.

Huckleberry Hound is celebrating the release of his new record. You can see the title of the album in the image above. I can’t help it if you have a dirty mind.

Best Imitation Of Rogue And Gambit

Emma Frost reluctantly comes to the conclusion she needs the X-Men’s help. They force her to meet them at a Malmart store. After Emma tells Rogue why now is the time to take down the Hellfire Club, Rogue makes her wait as she discusses it with the team.

While waiting, Emma does impressions of what she’d like to believe they’re saying.

When Boo Boo goes missing, Yogi Bear hires Deathstroke to help him find him. Something has been happening to the animals at Jellystone Park. They soon discover that H.I.V.E. is responsible and has a collection of familiar critters being held captive.

In the aftermath of a battle between Multiple Man and…Multiple Man, the prime Jamie Madrox was killed and the result was a mountain of dead dupes. You can imagine the clean up on this isn’t going to be easy.

Best Battle Between Apes You Never Knew You Wanted To See

Grape Ape vs. Magilla Gorilla. What more needs to be said?

The Inhuman known as Reader can do some amazing things. He is able to see through the eyes of his dog Forey. Frank McGee is concerned about Forey getting distracted by something like a squirrel.

Poison Ivy is at Sanctuary doing her interview/confession. Somehow Harley managed to follow her there. As Ivy explains she’ll be in trouble if Superman, Batman, or Wonder Woman finds out she’s there, Harley responds by “booping” Ivy…more than once. 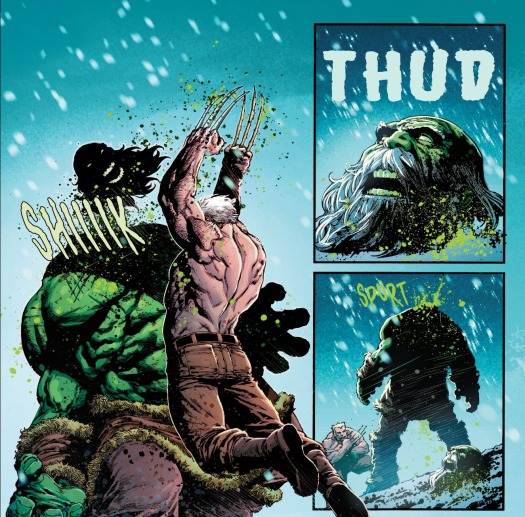 Old Man Logan is in bad shape. His healing factor is barely working. He even had one of his hands chopped off and no longer has Adamantium claws on that hand. He’s been fighting Maestro, an evil future version of Hulk. It looks like Maestro may have gotten in a little over his head with this confrontation.