As the story continues to progress in Twin Peaks, we’re witnessing some of the darker areas of those connected to the small town. There are still a lot of questions that need to be dealt with, but some some answers do come to the surface this week.

It’s interesting to look back at the season so far and see how some of the minor plot points are coming together. The further along we get, the more it feels like one giant cinematic story. That’s why some characters are missing for a few episodes and then make a small appearance. Here’s what happened this week, what we found out, and what we still need to know. There will be spoilers for Twin Peaks Season 3, Episode 10.

All images courtesy of Suzanne Tenner, Patrick Wymore, and SHOWTIME.

Richard Horne Is An Evil Jerk 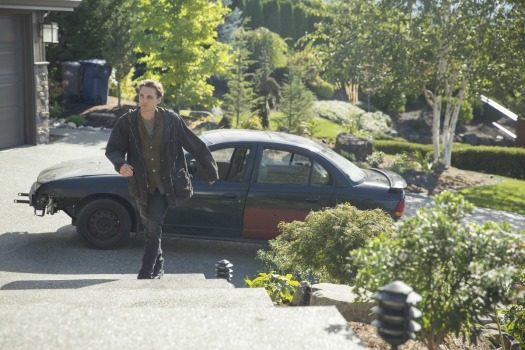 Back in Episode 6, Richard Horne hit a kid while driving someone’s truck and was seen by a woman named Miriam. He goes to her place to find out if she told anyone. She informs him that she already told the police, and he should leave. She’s surprised he hasn’t been arrested yet. Because of this, she also sent a letter to Sheriff Truman telling him everything she knows and if anything happens to her, it’s because of Richard. He charges into her trailer and leaves her unconscious in a bloody heap. He also turns on the gas in the oven with a candle left nearby. He then calls Officer Chad Broxford, the shady cop, to intercept the letter.

His second visit is to Sylvia Horne’s house. He wants money to leave town. He gets rough and verbally abusive with her while Johnny is tied to a chair. (Johnny is tied because he was running around the house and ran into a wall). She later calls Ben and demands more money.

Janey-E takes Cooper to their doctor, still believe he’s her husband, Dougie. The doctor is impressed with his condition and how much weight he lost. Janey-E takes notice as well.

Later, Janey-E asks Dougie if he finds her attractive. This leads to the bedroom. Cooper is still in a dazed state but enjoys the experience.

The Mitchum Brothers Have A New Enemy 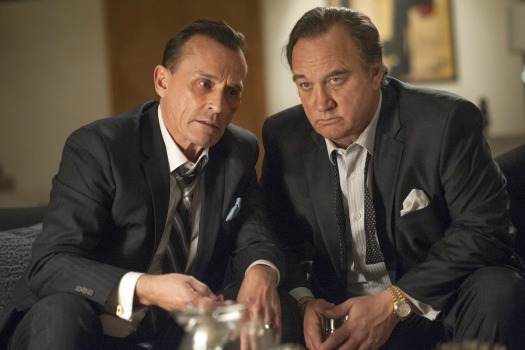 After Rodney Mitchum accidentally gets hit in the face when one of the showgirls, Candy, tries killing a fly, he and his brother, Bradley, see the news of the arrest of Ike “The Spike.” They previously had a hit out on Ike. The report mentions Ike’s attempt on Dougie’s life. They recognize Jones/Cooper since he won the jackpot at their casino.

When Duncan Todd hears the news of Ike’s arrest, he tells Anthony Sinclair to convince the Mitchum Brothers that Dougie caused their insurance claim to be flagged. This results in the loss of 30 million dollars, and hopefully they’ll want to kill Jones. When he visits them, he tries reinforcing the point that Dougie Jones is their enemy.

Gordon is in his hotel room, drawing a strange picture, when there’s a knock on his door. As he opens the door, there’s an image of Laura crying (when she discovered who BOB was) along with her mom calling her name. It turns out to be Albert at the door. Albert tells him about the text Diane received and notes it was after (Evil) Coop escaped. Diane responded with an encrypted message, “They have Hastings. He’s going to take them to the site.” Gordon suspected something was off with her and suggest they keep her close. Tammy arrives with a photo from the penthouse murders in New York City. Evil Cooper was there.

Other Things We We Found Out

There are eight more episodes left. This week’s episode felt a little off. Maybe it was cruel behavior by Richard and Steven that leaves a bad taste in the mouth. There hasn’t been any new developments with Cooper, aside from his nighttime activity. The Vegas police still need to get the results of his fingerprints on the coffee cup last week. Hopefully this raises an alarm with the FBI. The same with the news report.

With so many different characters on the show, it does feel like it’s taking longer to get the answers we want. Each moment does add to the overall story of the season and rewatching all the episodes will likely change the feeling, but having to wait an entire week can be difficult. Some moments are crucial to the main story while others, like Jerry’s lost in the woods adventure, are entertaining but not important. We still haven’t seen Audrey. It may sound like I’m being impatient, but there’s still so many answers we need, especially about everything from Episode 8. Perhaps well get some more next week.

One Reply to “Twin Peaks Season 3 Episode 10 Review–What’s Going On?”