The fifth season of Marvel’s Agents of SHIELD is finally here. Similar to past seasons, this one is starting out going in a different direction. If you caught the finale of Season 4, you saw Phil Coulson somehow ended up in space. That’s just the beginning.

If you want to read the early spoiler-free review from earlier this week, you can check it out here.

Warning: There will definitely be spoilers for Season 5, Episode 1 and 2 of Marvel’s Agents of SHIELD, “Orientation,” below.

Everyone arrives on board the space craft except for Fitz. For some reason, he was left behind when the entire team was abducted. They were all placed in a room in front of a monolith that looked different from the one that transported Simmons to Maveth.

Coulson was immediately recognized by a man named Virgil. He claimed to be a True Believer. He becomes further excited to see Mack, Simmons, and Yo-Yo. Virgil tells them they’re history. There were stories that they would arrive to save humanity. Before he an further explain, he’s grabbed by the claws of a “roach,” an alien predator in this section of the craft.

The agents soon find themselves on the run from a roach. When they find themselves at a dead end in a corridor, they’re saved when Daisy quakes the alien to pieces. May teleported elsewhere with a bar passing through her leg. She freed herself just in time to face off against another inhabitant named Deke.

Deke And The Kree

Coulson, Daisy, Simmons, Mack, and Yo-Yo found a control room and figured out they were on a colony ship. This suggested they must be close to home. When they try to access the computer to send a message to Fitz, the screen informs them, “Human Access Denied.” Kree enter the room and knock them out. Coulson, Daisy, and Simmons are locked in a cell while Mack and Yo-Yo are taken elsewhere to be interrogated.

Deke managed to get the upper hand over May in their fight and placed a device called a “metric” on her wrist. He finds them and acts like he knows them in front of the Kree. The story he uses is they are transfers and were supposed to be taken to processing. When they’re alone, Deke makes it clear he doesn’t want to get further involved. Daisy goes in search of Mack and Yo-Yo while May and Simmons search for a shuttle.

Where Exactly Are They?

When Coulson asks Deke who built the colony ship, he tells them he was born there and it was built 90 years ago. They’re in the future. The monolith made them travel through time. Simmons and May discover Earth has been destroyed. The Kree are there and only want submission.

It’s unclear if it was Virgil’s plan to bring them into the future. There isn’t a second monolith there so they’ll have to find their own way back. Deke still refuses to help them but tells them they need to blend in. He gives them some extra metrics and tells them to put them through their wrists.

As for what happened to Earth, there are different stories. When the Kree arrived, they destroyed all the records 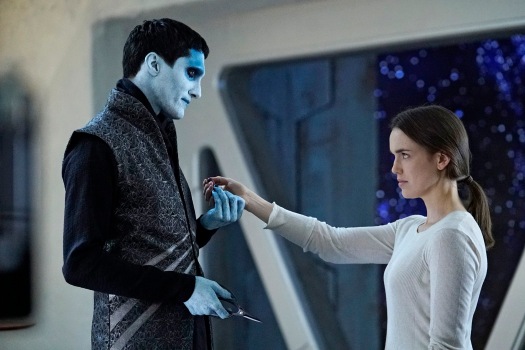 In a common area, food pellets are dropped in. People start fighting over the food, and a robed man with the Kree accidentally gets stabbed. Simmons has no choice but to act and cauterizes the wound. The Kree take her, and she’s brought to a high-ranking Kree with an infinity for perfect things. He’s surprised and impressed she does not have a metric and is not scarred.

When the Kree sees the scar on the man Simmons saved, he kills him. He places something in Simmons’ ear which causes her to only be able to hear the Kree. She is then dressed in a robe and has her face painted to be one of the Kree’s servants. There apparently are guests arriving in another ship.

Return Of The Framework? 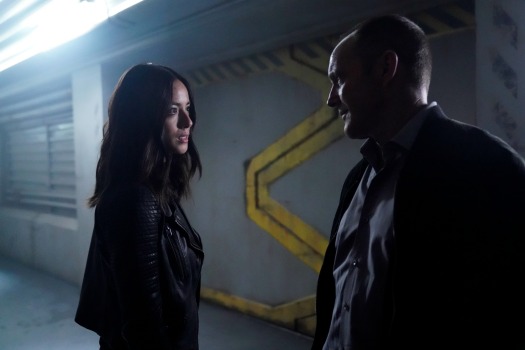 Before the fight over food occurred, Daisy followed Deke as he headed out to another part of the ship. She found him in a weird drug den-type room with a bunch of people sleeping. When she gets close to where Deke is lying, she appears to pass out.

It’s soon seen Deke seems to have entered the Framework and Daisy got sucked in as well. She follows him into a bar, and he immediately realizes she’s there. This is his business on the colony ship. He sells an escape for the people. He came across the technology but never heard it referred to as The Framework.

The two start arguing about the semantics of selling access to the a lie. Deke tells her the Kree know about his business. It keeps the people complacent. They’re close to extinction so they need to be able to find an escape in order to keep their spirits up. He then notices Daisy’s name mentioned on the TV in the bar. He tells her he knows what tore Earth appart–her quake powers.

You can check out my spoiler-free thoughts here.

With no appearance by Fitz, it’ll be interesting to see what part he plays in helping the Agents get back. In the promo images for the season, Iain De Caestecker is seen with the others. Perhaps he’ll find a way to the monolith and travel through. It wouldn’t be the first time he’s jumped into the unknown to save someone he cares for. We also need to find out what the deal is with the postcard he must have sent at some point which ended up (in the future) in Virgil’s possession. Also, what was up with the alien/government guy at the beginning that orchestrated the abduction of the agents?

It’s interesting that Yo-Yo almost lost both her arms. Both her arms were severed in the comics and she got prosthetics. When the Kree soldier was torturing her and was blasting her with cold, I was sure she was going to lose them.

Who are the visitors to the colony ship?

As I mentioned in my early review, it’s a bold and risky move to have the agents out in space. There’s also the fact they’re in the future. There’s no telling what this season will bring. Depending on how long they’re in the future, it could take care of us nit-picking fans that are bothered by the fact there can’t seem to be an actual crossover with the Marvel Cinematic (movie) Universe. Avengers: Infinity War appears it’ll feature almost everyone else. If the agents are in space and in the future, we can accept their absence when the world is threatened by Thanos.