Something many never really thought about has finally happened. Action Comics has reached it’s 1000th issue. Of course there has been different volumes and re-numberings, but what matters is, the celebratory issue has hit the stands. The first issue, featuring the debut of the Man of Steel was released 80 years ago. (Don’t worry about the math since there was a period in the late 80s the series was released weekly).

Action Comics #1 may have delivered the first appearance of Superman, but it’s also considered the beginning of the superhero genre. 80 years later, Action Comics #1000 is a fantastic issue for Superman fans of all ages. Plus, the issue brings back the red trunks. 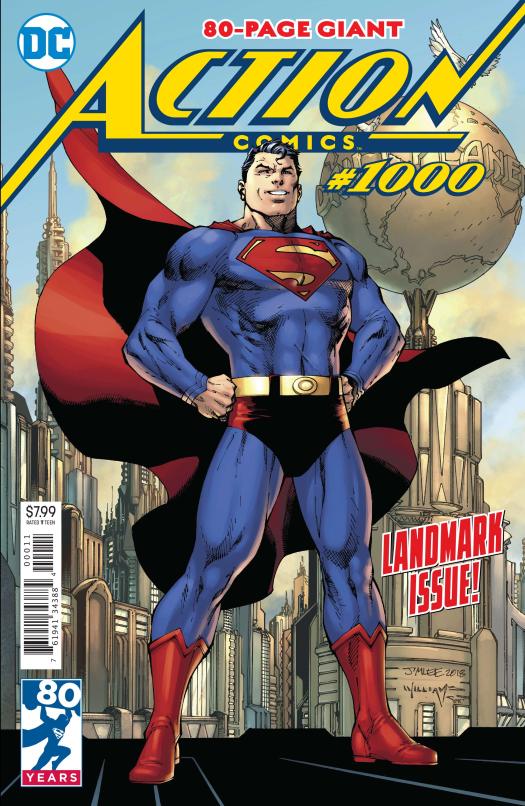 Action Comics #1000 is an oversized, 80-page comic featuring art and stories by an onslaught of top creators in the comic book industry. (You can find the specifics of the contributors here). The eleven stories feature a mix of celebrating the character’s history, looking forward into the future, or setting up what’s just around the corner. It doesn’t matter if you haven’t ready a Superman comic in years or if you’ve consistently read his adventures, there is something for everyone.

Some of the stand out stories include Dan Jurgens and Norm Rampmund showing the world’s gratitude towards Superman; Peter Tomasi and Patrick Gleason say farewell to the character with a charming look at the history of the character; Geoff Johns, Richard Donner, and Olivier Coipel deliver a fantastic story tied to Superman’s very first appearance; Tom King, Clay Mann, and Jordie Bellaire give us a touching story from Superman’s future; Louise Simonson and Jerry Ordway’s classic story will make you feel like you’ve journeyed back to the 80s; and Brian Michael Bendis and Jim Lee’s story shakes the foundation of Superman’s origin with a hint of what’s to come in Bendis’ Man of Steel miniseries. This covers about half of what you get in the issue.

You’ll also find a choice of covers you can pick up. Even though I read the comic first digitally, I knew I had to visit a comic shop to pick up a physical copy. I had to stop myself after picking up four of the covers. The covers are by Jim Lee and Scott Williams, Steve Rude, Michael Cho, Dave Gibbons and Angus McKie, Mike and Laura Allred, Jim Steranko, Joshua Middleton, Dan Jurgens and Kevin Nowland, and Lee Bermejo. If that wasn’t enough, you can also get a blank cover to get a commission from your favorite artist the next time you’re at a convention. 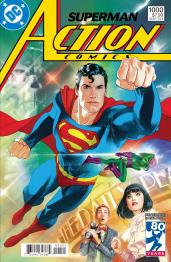 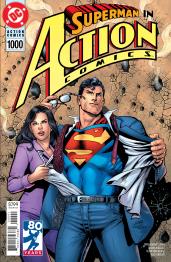 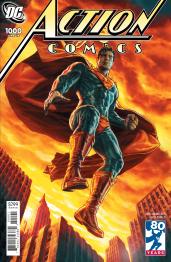 Aside from all the stories featuring cool stories with Superman, they all have him in his classic costume with the red trunks. When I talked to Dan Jurgens at WonderCon, I asked him if we’d find out how and why the shorts are back. The unfortunate answer is, it’s not explained. They’re just back. Bendis’ story does reference them being back, but there is not an answer as to what made him return to his classic, iconic look. Practical or not, I am more than happy to see their return.

Action Comics #1000 is a comic book you’ll want to have a copy of. This is a huge milestone. This is a comic series that has been in print, consistently for the past 80 years. There is a $7.99 price tag you have to consider (especially when picking up multiple covers), but it’s a comic you’ll want to hold onto and cherish. If that’s not your thing, you can expect some really excellent Superman stories with amazing art. It’s a comic you could give to non-comic book readers if you’re trying to entice them to enter the world of superheroes.

Don’t miss out on the celebration. We’re talking 80 years of adventures. A comic series reaching its 1000th issue isn’t something that happens often.

Be sure to let me know which cover you end up getting and which story was your favorite.