This is incredible news.

West Coast Avengers first debuted back in 1984. Hawkeye (Clint Barton), being the headstrong hero that he was, decided to move to California and start up a new Avengers team. Starting as a miniseries, it soon became a long-running series (and eventually changed its name to to the lame title of Avengers West Coast).

Clint is back, and this new incarnation couldn’t make me happier. 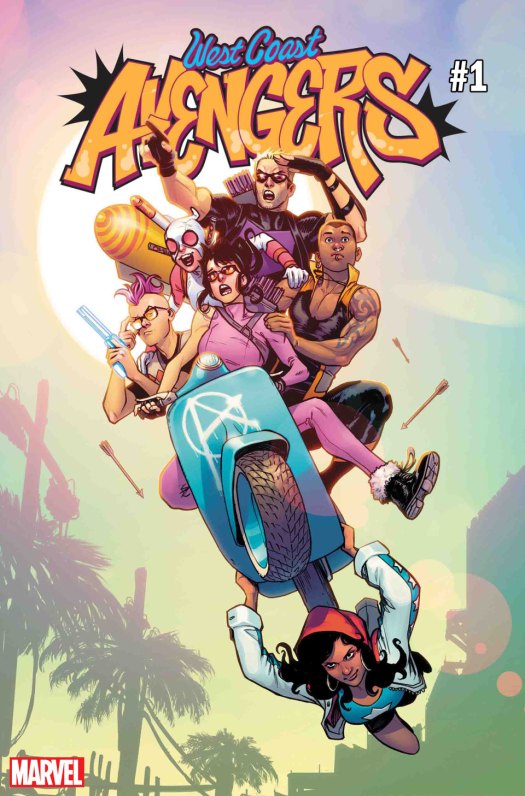 Marvel announced the new team. Check out the roster. Along with Clint, we have the other Hawkeye–Kate Bishop. We also have Gwenpool, Quentin Quire, America Chavez, and Kate’s boyfriend Johnny.

The series will be written by Kelly Thompson who had an absolutely amazing run with the Hawkeye series starring Kate Bishop. She also wrote a great Rogue & Gambit miniseries. The groovy art will be provided by Stefano Caselli. This is all fantastic.

“They all need and want something from being on that team together. Kate needs to help save LA, and she needs help to do that because villains have taken notice that there are no Super Heroes out there. I think there’s part of her that misses [being on a team] too. She’s been doing her own thing, on her own, and that’s cool. But she was the one, who, with no powers, was like ‘I’m leading the Young Avengers, I’m the boss.'”

As I mentioned on my Best Of 2017 list, Hawkeye by Kelly Bishop and The Unbelievable Gwenpool were some of my favorite comic series of the year. Having them on the team with Clint is going to be great. Adding Quentin Quire adds both firepower and a heap of attitude. America Chavez is also going to bring quite a bit to the team and series as well.

West Coast Avengers #1 is on sale August 22. Ask your local comic shop immediately to order you a copy (or ten).