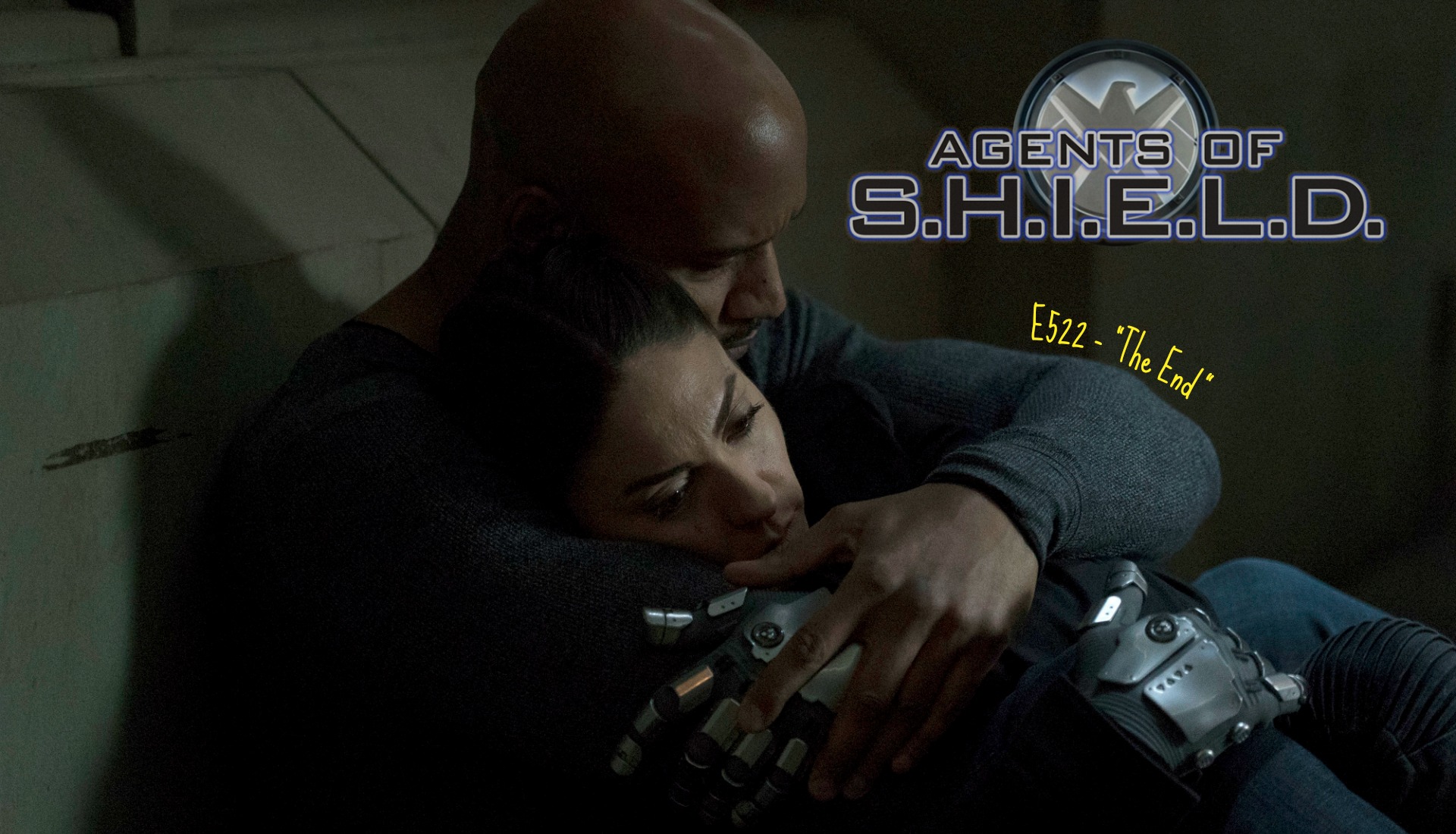 The Season 5 finale may be titled, “The End,” but it’s not the end of the series. (More on that below). SHIELD is facing their biggest threat yet. The lives of many are on the line. This is their final chance to come up with a plan to put a stop to their Gravitonium-fueled enemy and try to save Earth from literally getting destroyed.

Will they succeed? Will everyone make it out alive? Be prepared to find out.

Warning: There will definitely be spoilers for Season 5, Episode 22 of Marvel’s Agents of SHIELD, “The End,” below.

Time For Coulson To Take His Medicine

Coulson is dying. The team has to decide whether they should use the Centipede Serum to save him or mix it with Odium to take out Talbot. Daisy mentions they now can’t get close enough to Talbot to inject him. It’s suggested someone could take the Odium and then get Talbot to absorb them. Yo-Yo is willing to sacrifice herself. May says if it doesn’t work, it would be for nothing.

Yo-Yo decides to take the device. They all start yelling at each other. Mack says they don’t kill. There’s always hope. May grabs the vial of Odium and drops it on the floor. That action settles the debate.

When Coulson wakes up, he mentions his hesitation to take the serum to Jemma. He says they’ve seen what happens when they don’t let nature take its course. May comes in and talks to him alone. She puts the device next to his bed and says it’s now his choice. They want him to get up and join the fight. She’s made it clear how she feels about him.

Talbot In The Windy City

Talbot asks Robin to show him where he pulled Gravitonium out of the ground in her vision. When she refuses, a couple alien guards take her mom away. He asks her again where the Gravitonium is.

Talbot uses his power to float part of the alien ship to Chicago. Smashing the tops of some buildings, they land on top of some. SHIELD prepares to head there after seeing the reports and when Robin’s tracker turns back on. Daisy also votes to put Mack in charge since he’s their moral compass. Coulson walks in with Daisy’s gauntlets and says it’s time to suit up.

Talbot floats down to the streets. It’s chaos, but SHIELD arrives to help with the evacuation. Up in a building, Mack and May find Robin. Her mom is still in the ship. The building’s integrity may not hold for much longer so Mack climbs in to look for her. He eventually finds her and gets her cell door open, only to discover the alien guards behind him. He starts fighting but is outmatched. Luckily May and Fitz come along and deal with the aliens.

Daisy gets ready to face Talbot when Coulson tells her he’s not going. He can barely stand. It turns out he didn’t take the Centipede Serum. She’s angry, but he tells Daisy she can talk Talbot down. She just needs to appeal to him as a military man. He’s given her all the tools she needs to do this.

Daisy starts running down the street. When she spots Talbot pulling Gravitonium out of the ground, she uses a quake-blast to send her self flying towards him. She starts yelling at him to stop. He is now becoming the enemy. She keeps talking, and it appears Talbot is listening. He says it’s a good speech, but it’s the same thing Hale said before she tortured him and what Coulson says before he stabs him in the back. Before she can blast him again, he uses his powers to grab her in order to absorb her.

Talbot and Daisy levitate up above the buildings. Talbot then sends them flying back towards the ground. They hit with a big impact that is felt in the surrounding buildings. This causes part of the ceiling to fall on top of Fitz. At the same time, Agent Davis got Coulson back to base. Jemma realizes the serum’s not in his room, and Yo-Yo starts doing compressions to revive him.

Robin and her mom are descending the building stairs when Robin stops and says, “Something’s different.” Daisy notices the Centipede vial is tucked in her gauntlet. She injects herself as Talbot prepares to absorb her. Eyes glowing red, she’s able to blast out of his grip. She falls to the ground and sends him flying into space.

Mack and May frantically dig for Fitz. They see a bloody hand reach out. Fitz tells Mack his leg must be broken, and he’ll have to carry him out. They keep digging, and Fitz says it must be bad because he can’t feel it. Mack sees Fitz has a huge wound from the rubble. He tells Fitz to relax and breathe. He’ll stay with him. Fitz says they need to save Robin’s mom. They tell them they did. She’s safe. Fitz did it. Fitz slowly passes.

Coulson is okay, for now. Jemma checks his vitals and smiles. Mack slowly walks in, and she turns around. Without saying a word, she knows. Shortly, she packs up his belongings, Daisy burns Robin’s drawings, and May takes a sledgehammer to the remaining piece of the monolith. (Deke left before the battle started, figuring it was either the end of the world or they’d save the planet and he’d blink out of existence).

Davis puts up a SHIELD badge remembrance plague in the Zephyr’s cockpit while the others prepare to have a goodbye drink. Coulson tells them it’s a celebration, not a funeral. It’s a weird comment as Simmons then walks in. They reminisce a little about how that place is their home.

Coulson says he spent a lot of years–a life surrounded by heroes. None have been bigger than this group. They sign up to lose each other, get close to good people only to have them taken away. He says you don’t have to forget those they’ve lost, but you have to move on. Simmons disagrees. She tells him, with respect, he’s wrong. She says they don’t move on. They hold a place in their heart that they close off and visit from time to time, but they don’t move on.

Coulson tells Simmons he’s sorry he didn’t get to say goodbye to Fitz since he’s now “retiring.” She can tell him. He has no doubt they’ll find him. They didn’t tell Coulson what happened. He thinks Fitz is floating in space. They say their goodbyes. It’s especially hard for Daisy. She asks him how much time he has. Simmons told him days, maybe weeks. Coulson tells her he left a letter in her room saying how proud he is of her. 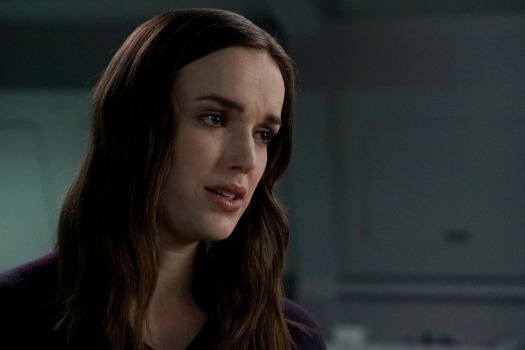 What a brutal episode. There is no debate over how great of a performance Iain De Caestecker put on. The show will not be the same without him. His death scene was tough to watch. With Coulson, he still has some time. For all we know, Captain Marvel will fly in with some other cure. Because we didn’t see it, and since he’ll get to be with May until the end, it doesn’t feel so bad. It’s not as real or harsh as Fitz’s goodbye.

Although, now that I think about it…there is still a “Fitz” actually cryogenically floating in space with Enoch, waiting to be revived in the future. There isn’t a need for that to play out anymore since they changed things. So maybe that’s what Coulson actually mean. Did he, in fact, know what happened to Fitz and figures they can find that Fitz. Is this why only Coulson’s badge was put up in the cockpit and not Fitz’s? There is hope he could return!

In case you haven’t heard, the show has been renewed earlier this week. There are some caveats. It will only be a 13-episode season, and it won’t begin until summer 2019. The later makes sense because they’ll need to wait until after Avengers 4. We didn’t see any more fallout from Thanos’ actions. Whether or not all that is dealt with in the next movie, we won’t know how SHIELD copes with it unless we get a recap when Season 6 begins with what they’ve been doing for a year. Then again, maybe Marvel will not have real time pass in between movies.

Mack is now in charge of SHIELD. Daisy may potentially be more powerful than before since she took the serum. This could make things interesting. What about Deke? Did Simmons get pregnant in between episodes? Is he still seeing the world or did he fade away now that his future isn’t happening?

It’s going to be a long wait for any answers. Thankfully we will be getting some. This has been a fantastic season. We’ve seen big risks, deep stories, and powerful performances. Agents of SHIELD hasn’t been playing it safe with the writing. It keeps getting better and better.

2 Replies to “Agents Of SHIELD Season 5, Episode 22 “The End” Recap And Review”