X-23 had an extremely horrible and rough life. Created to be a killing machine, she spent most of her life locked up while awaiting for her next mission where she would be forced to kill. Now imagine that killing machine bonding with the power of the Venom symbiote. That’s what we’ll see in the first issue of Edge of Venomverse on June 28.

The 5-issue miniseries will explore Venom-ized versions of our favorite Marvel characters. Matthew Roseberg and Roland Boschi will tell the story of X-23 escaping the facility with the help of the Venom symbiote.

“We are showing a world where X-23 manages to escape from her creators with the help of Venom,” said series writer Matthew Rosenberg. “It’s a fun chance to explore two of Marvel’s most dangerous characters and see how things could have been different for them if their lives intersected. And if you are a fan of X-23’s early adventures, you’ll be happy to see some familiar, but slightly different faces in the book.”

It appears to be a series of WHAT IF? stories in the miniseries. If that’s the case, it sounds cool. Check out the first look preview for the first issue. 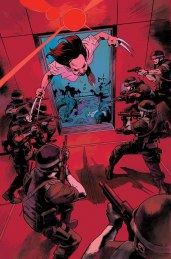