This was a crazy and awesome episode. It was also directed by Clark Gregg.

All the pieces are in place. We now know how and why the agents have been sent to their current time and place. We’ve seen what happened after they were taken. We also know what Fitz’s role in the whole adventure is meant to be. What’s become clear in this, and past episodes, is it’s a dangerous place they’re in. Things are likely to get worse before they start getting better. There just may be bigger threats headed their way.

Warning: There will definitely be spoilers for Season 5, Episode 6 of Marvel’s Agents of SHIELD, “Fun & Games,” below.

As seen last episode, Fitz spent 70-something years frozen in order to journey to the future. Enoch has helped establish a grizzled and ruthless persona for him in order to get an invite to Kasius’ big auction of the “Destroyer of Worlds.”

Fitz sees Jemma and eventually makes his way towards her. He says the galaxy can’t stop them. They’ve been through and have seen so much. Together, they’re unstoppable. He doesn’t want to live another day without her and proposes to her. Unfortunately, she can’t hear him. Kasius comes up, and Fitz manages to come up with a story that his slave is ignoring him. Kasius then turns off the silencer. Through his interactions with Fitz, Kasius has grown to admire him and his “way” of thinking. While the dinner party is happening before the big auction, human children are being gathered in the other levels to be put through Terrigenesis. Flint, a kid briefly seen talking to Tess in a previous episode, is gathered up even though he’s supposed to have a couple years before being taken. Flint stands on a platform with three others when a Terrigen crystal is broken.

Flint is the only one to enter a cocoon. When he emerges, he’s nowhere to be seen. Yo-Yo grabbed him and took him to safety. Flint wants to go back as the Kree search for him. Yo-Yo tries explaining being sold by Kasius won’t be a good thing. Grill returns early and hears Yo-Yo’s story about when she went through Terrigenesis. He plans to turn them over to Kasius for a reward. Coulson lays out the truth that they came from the past. This causes Grill to laugh and zap them with his controller.

It turns out Flint can control rocks and rubble. He makes some small rocks hit Grill, which angers him. Yo-Yo tells Flint to concentrate as Grill points his gun at him. Several rocks form into a big boulder, and Grill is smashed. They tell Flint he didn’t have a choice. Coulson and Mack search for Tess to get Flint to safety when they discover that she’s been killed and left with a sign pinned to her chest, “Bring the Inhuman.”

Kasius invites Fitz to sit by him as they watch the first fight. Ben, the telepathic Inhuman, has to fight May. May eventually lands a punch even though Ben is reading her mind. Because she’s still hurt, she can’t overcome him. Fitz manages to get the fight stopped by exclaiming his boredom. He’s there to see the Destroyer of Worlds. He tells Kasius the “has been” agent should be sent to the surface. Shortly after, Kasius has Ben killed for lying about how many came from the past with Daisy and Jemma.

Enoch informs Fitz there is another problem–Kasius’ brother has arrived and is interested in Daisy. Fitz isn’t happy, but Kasius is pleased because it means word of his activities has reached his father. Kasius’ brother wants a big show. He doesn’t want the Destroyer to fight a simple “homegrown” Inhuman. He wants her to fight a Kree warrior–Sinara. 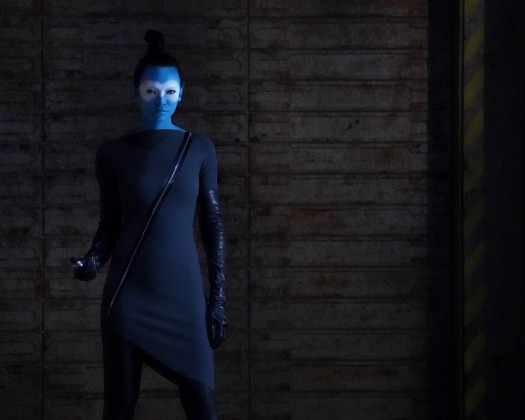 When Daisy enters the arena, a force field is turned on to protect the viewers. Daisy dodges Sinara’s flying orbs and blasts her against the wall. After some hand-to-hand fighting, Daisy stands over, ready to blast her again. She hesitates and is hit in the shoulder by an orb. Another comes at her, and she stops with it with a quake blast. She intends to send it back “for Ben” but misses Sinara.

The fight goes on, but Daisy finally manages to knock Sinara out. Nodding to Fitz, he knocks out a buyer sitting next to him, Jemma slashes Kasius’ throat with a knife she hid during the dinner, and Daisy quakes up in the air to send a final blast as Fitz turns off the force field. Unfortunately, Kasius’ brother grabs the inhibitor device and blocks off Daisy’s powers. Fitz manages to get Jemma to safety and blasts the force field control panel as they jump into the arena. Jemma says she’s never going to leave Fitz again and proposes. He says, “Absolutely,” and then tries to point out he did propose first when she couldn’t hear him.

Enoch walks towards an elevator and appears to be blue, like the Kree. Opening the door, a guard asks him if he knows where he’s going since people that go there don’t come back. Enoch knocks the guard out and says he’s not a person. Is he headed to the surface?

Clark Gregg directed an amazing episode. It feels like things are speeding up. As in past episodes, it seems as if the story could easily be drawn out more. That doesn’t seem to be the case as characters are being killed left and right (Kasius, Tess, and Grill). Tess’ death was a surprise. There was the impression Tess could play a bigger role in the story. Her death, and the others, shows the stakes are high, just as Virgil was killed right away.

The agents are trying to save humanity. Perhaps the only way is for them to find out what exactly happened to cause Earth’s destruction. It’s likely Quake wasn’t the true cause of it. Once they find out (in the coming episodes), it’ll be a matter of trying to return to the past to change the future.

Time travel is always an interesting and sticky concept. With Fitz being frozen in order to be revived in the future, that means time went on without him. Hunter (and Bobbi) would have lived the rest of their lives not knowing if he succeeded. If and when the agents return, will that simply erase the future events they all went through or will it cause an alternate timeline (as often seen in the comics)? What happens when they return? SHIELD has been disbanded and they are still wanted for the shooting of General Talbot. Will they return to the point when they were first taken or six months later when Fitz started his journey?

Agents of SHIELD continues to be an amazing show. You never know what’s going to happen. Big risks are taken and viewers are kept on the edge of their seats.