There’s a war coming to the Marvel Universe. Sounds like just another typical Wednesday. This time things appear a bit more intense than normal.

The War of the Realms has been brewing recently, and it’s about to spill over into the proper Marvel Universe. Marvel is billing this as an event on scale with Secret Wars. Check out the promo art to see all the heroes involved including the Avengers, Fantastic Four, Venom, Punisher, Blade, Spider-Man, and more. 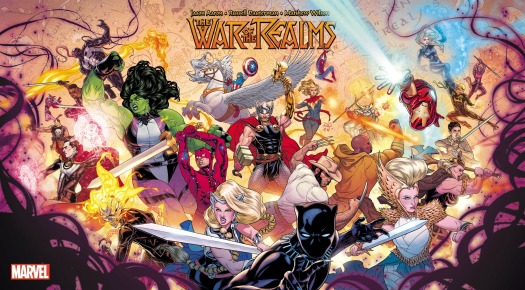 The story by Jason Aaron, Russell Dauterman and Matthew Wilson begins in April and consists of six issues within three months.

Here’s what Aaron had to say:

‘I have been building towards War of the Realms for the entire duration of my Thor run. So we’re talking six years and 80-something issues and counting. This is a war that covers the entire globe and involves the biggest heroes of the Marvel Universe, as you can see in this amazing promo piece by my MIGHTY THOR collaborators, Russell Dauterman and Matthew Wilson, who I’m so thrilled to be working with again on War of the Realms.’

From the promo art, it appears as if the X-Men might not be too involved. Wolverine is clearly present, but this is likely the Phoenix-Wolverine from the far future seen in the pages of Thor. Also, what’s up with Daredevil’s cosmic-y costume and why does he have a sword? Guess we’ll have to wait until April to find out. And thank goodness the Fantastic Four will be involved now that they’re finally back where they belong.