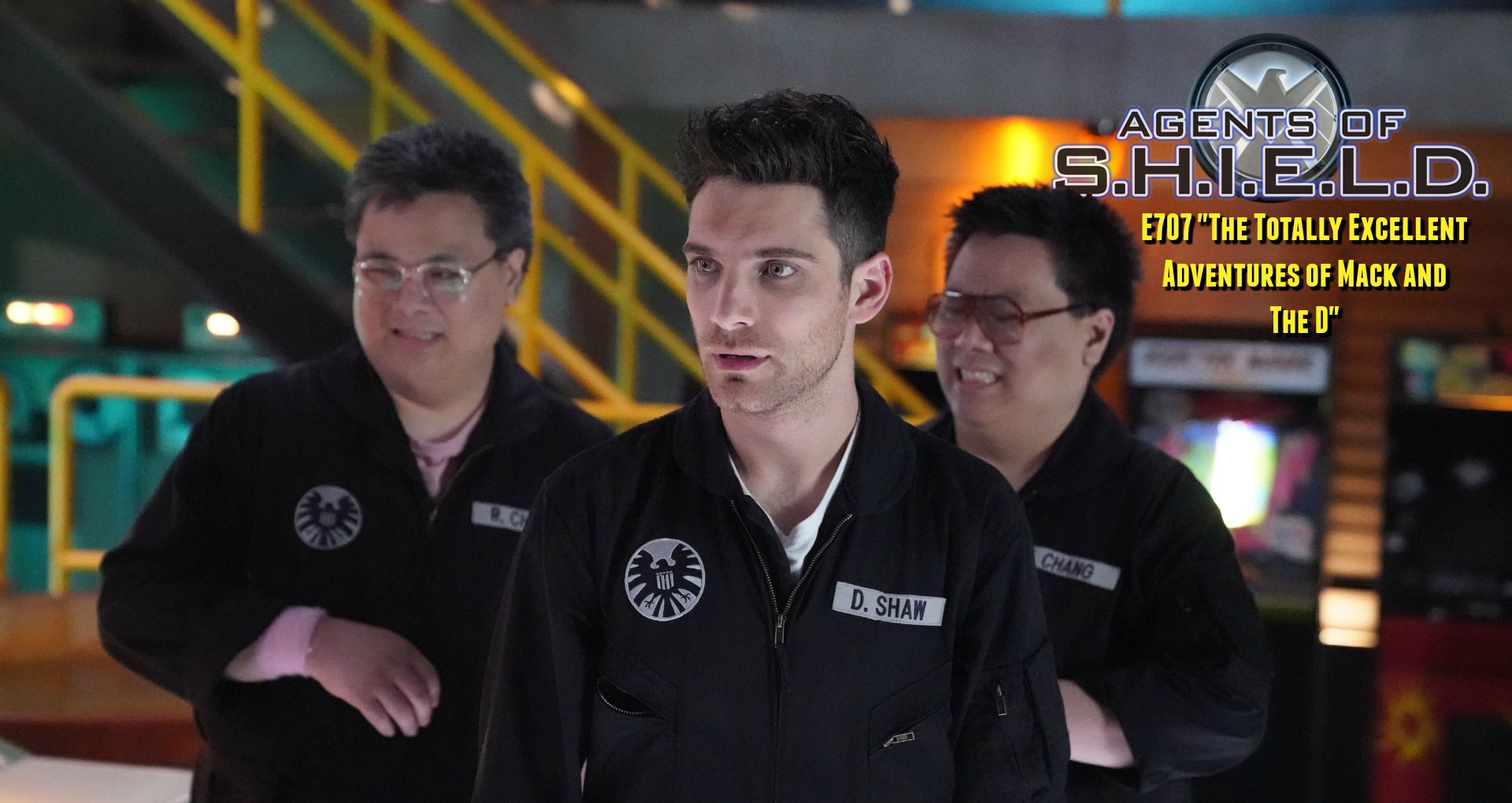 This week’s episode of Marvel’s Agents of SHIELD is totally awesome, for sure. It appeared Coulson and the others finally put a stop to the Chronicoms and their evil scheme to destroy SHIELD and take over the world. Yet the time machine tech built into the Zephyr caused another time jump which left a couple agents stuck…in the 80s.

Warning: There will definitely be spoilers for Season 7, Episode 6 of Marvel’s Agents of SHIELD below.

(All images courtesy of ABC Studios).

She Blinded Him With Science

At a computer repair shop, a nerdy repair guy is surprised when text starts appearing on a screen, “Will you help me Y/N?” He hits yes. The computer says it’s been waiting for him, and he asks who is he talking to. A printer next to computer starts up and prints a picture of Sibyl using text characters.

After a week goes by with the store remaining closed, the guy spends his time working on Sibyl’s blueprints. She can talk now with a slightly computerized voice. He vows to keep working until she’s standing there with him.

He eventually builds an 80s style robot complete with a Knightrider red pulsing “eye.” On a later day, he arrives to find the Sibyl robot working on another one. He’s hurt because he’s been waiting his whole life for her. She says he knows too much. Behind him is yet another completed robot with a buzzsaw, and it kills him.

After the Zephyr time-jumped without Mack and Deke, Mack gets angry, saying they should never have messed with time. Deke tries comforting Mack by saying he lost his parents too at a young age. If he wants to talk about it, he’s there for him. Mack decides to get on his motorcycle and leave. Deke says the Chronicoms could still be out there. Maybe that’s why they were left in 1982. Mack tells Deke to figure it out and drives off.

After seeing his ten-year-old self and brother arrive at his uncle’s house, Mack shuts himself off from the world, working on building car models in solitary. Some time has passed, and Deke pays him a visit one day (wearing a Members Only jacket, of course). Deke says it took him some time to find him because the Internet doesn’t exist. Mack finds a way to kick him out.

When New Year’s Eve rolls around, Mack has a huge beard and won’t answer the door when Deke tries bringing groceries. Deke comes over another time with more groceries and sees Mack never brought in the previous bags he left on the door step. Deke writes on a piece of paper and shoves it under the door. When Mack finds it, it says to meet tonight at a place called Sharpe’s. It’s urgent.

Don’t You Forget About Deke

Mack arrives at the bar and asks to see Deke. The bartender says everyone in there paid to see The D. Mack turns around as Deke walks onto the stage wearing white boots, red leather pants, and a red headband. He says he wrote this song and starts singing, “Don’t You Forget About Me.”

Mack is upset Deke is stealing again. He tells Deke that song is from The Breakfast Club, but Deke says not until 1985. For now, it’s a Deke Shaw original. Deke goes on to explain the band isn’t a cover band. The band is the cover: Roxy Glass is covert ops and tactical, Tommy and Ronnie Chang are masters of disguises, Olga Pachinko handles demolitions, and Cricket. Cricket was a shady guy, but they really needed a drummer. It turned out he had a job selling Coke, but Deke thinks it’s weird because he never sees him drink the stuff.

All They Need Is A Miracle

Mack later finds out Coulson survived his explosive sacrifice. Deke found his hard drive and now he’s trapped in an old VCR with a strong resemblance to Max Headroom. Even though Coulson tells Mack he thinks Sibyl survived and is building new hunters and the fact that Deke got him a shiny new shotgun axe, Mack is hesitant about this new team. He says he’s not the director and this isn’t a team. It’s a bunch of losers lead by a man with a Peter Pan complex.

The robots have infiltrated the base. Cricket gets killed. Roxy tries talking to Mack as he leaves. She mentions how Deke has been checking in on Mack’s kid who looks just like him. She’s obviously unaware it’s really the younger version of Mack. Then another robot comes after them while the first kills Cricket’s girlfriend in front of the Chang Gang and Olga.

After a big testosterone 80s handshake between Mack and Deke, Mack trims his beard and suits up. Coulson wonders why they would attack the base. They manage to defeat the robots using teamwork, but a small one gets away with a piece of electronics.

The Zephyr appears and May and Yo-Yo head out in a quinjet to bring back Mack and Deke. The little robot eventually arrives at Nathaniel Malick. Sibyl appears on a screen and tells him he now has the one tool he’ll need to control his world’s future.

With each episode, I keep thinking “This is my favorite one of the season.” As great as the 70s were, this might have been a more fun episode. Seeing Deke, Mack, and “Coulson” in the 80s was a blast. The only down side is it would’ve been even more fun if we got to see more of the others in this era.

There is a feeling that the showrunners and writers are really going all out this season. They’re pushing things and taking big risks in order to deliver a highly enjoyable final season. My only problem with episodes like this is it lessons the appearances of the rest of the cast. I won’t even both to mention the lack of Iain De Caestecker this season. I suppose however long passed on the Zephyr allows time for Daisy to heal. Then again, their appearance may be instantaneous after they disappeared 20 months earlier.

We do have to wonder how their actions in each era will impact the overall timestream. Deke suggested small ripples wouldn’t have a huge effect. With Malick living six years longer and trying to launch Project Insight decades before Captain America: The Winter Soldier seems like a big deal. What about Deke singing “Don’t You Forget About Me” three years early? It was also mentioned other songs included “Here I Go Again” and “Walk Like An Egyptian.” Perhaps those listening to the music in a small bar won’t fully remember the songs, depending on how many appearances The Deke Squad put on.

It’ll be interesting to see if Coulson gets another regular body. When he asked, he was told he’d have to wait and see. We’ll also have to wait and see if we end up seeing more familiar faces as the team inevitably heads towards more current times. Could we see a younger Nick Fury or even Grant Ward? If they’re changing things so drastically with no consequences, why not save young Ward before he has the chance to go full Hydra?

I can’t wait to see what next week has in store for us.

One Reply to “Agents Of SHIELD Season 7, Episode 7 “The Totally Excellent Adventures of Mack and The D” Recap And Review”