The latest episode of Twin Peaks pushes the story forward. Past episodes have had a balance of answers and new questions. This week, it’s more about finding out where everything is headed. This season continues to feel like one long movie that’s being broken down into the different parts. Seeing how all the pieces are falling into place is fascinating. In part 7, a major revelation deals with a scene from Fire Walk With Me. We’re finally getting some answers to the questions we’ve had for over twenty-five years.

Here’s what happened this week along with the latest questions that have popped up. There will be spoilers for Twin Peaks Season 3, Episode 7.

Hawk shows Sheriff Truman what he found in the door of bathroom stall–the missing pages from Laura Palmer’s diary. One page mentions writing about a dream she had, “My name is Annie. I’ve been with Dale and Laura (me??!!!). The good Dale is in the lodge and he can’t leave. Write it in your diary.” This was from a scene from Fire Walk With Me, before Laura’s death. Hawk thinks this is what the Log Lady wanted him to find, and “Annie” may be Annie Blackburn. Hawk is certain these are three of the four pages that were torn out even though it was written before Cooper came to Twin Peaks.

What’s Up With The Headless Body In The Morgue?

Lt. Knox investigates where the fingerprints came from that sent an alert. She assumed they were taken at a crime scene and is surprised to hear they were from a body. The surprises continue when she sees the body is missing its head. When she asks how old the man was, the coroner says he was in his late forties. She calls Colonel Davis to inform him they have an actual body this time and not just prints. Major Briggs should have been in his seventies.

Albert tells Gordon about Diane’s reluctance to help them. They both visit Diane so Gordon can try to convince her to go with them to the federal prison in South Dakota. They need someone else who knows Cooper very well.

At the prison, Evil Coop recognizes Diane right away. She asks him when they saw each other last. He tries to avoid the question. Asking the question again, he replies it was at her house. She knows something is off and asks, “Who are you?” She cuts off the conversation short and walks out. She then tells Gordon that it’s not him. Something is missing with Cooper. When Gordon asks about the night they talked about, Diane tells him they’ll have a conversation about it sometime.

Evil Coop asks a guard to tell the warden he needs to talk to him about a strawberry. Hearing this, Warden Murphy agrees to see him in his office. He turns off the security cameras and pulls a gun on him. Evil Coop mentions the dog leg found in his trunk. The other three legs went out with information to people the warden wouldn’t want coming around if anything happens to him. To convince the warden he knows something, he mentions the name Joe McClusky. This, in turns, causes the warden to ask him what he wants. Evil Coop wants a rental car for him and Ray Monroe. (Ray was working with Evil Coop, was supposedly going to kill him with help from Darya, and was arrested for taking guns over the state line). 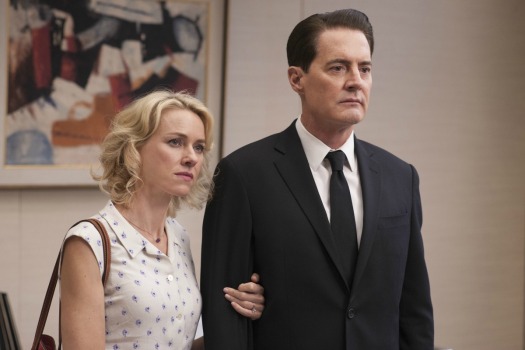 Janey-E is waiting outside Dougie Jones’ office to bring him home. At the same time, police arrive to talk to Dougie/Cooper about his car. In his current state, Cooper is incapable of fully answering questions. Luckily, Janey-E enters Dougie’s office to take charge of the situation.

Outside the office, Ike “The Spike” runs up and points a gun at Cooper/Dougie. Cooper shoves Janey-E out of the way and pins The Spike on the ground. Cooper sees a vision of the evolved Man From Another Place who tells him to squeeze his hand off the gun. Ike runs off and Cooper appears to return to his sluggish state.

The Mysterious Ringing At The Great Northern

At the Great Northern, Benjamin Horne talks with his assistant Beverly. There’s a strange ringing noise that started last week and they can’t figure out where it’s coming from. As they search, she tells Ben about a key that was returned. Ben mentions they switched to key cards over twenty years ago. Looking at the room number, he recalls that was the room where Agent Cooper was shot.

Other Things That Happened

Cooper is on his way back! He still hasn’t fully recovered from his journey back, but he managed to take down The Spike with ease. Hopefully there will be mention of the attack on the news that could somehow catch Hawk’s attention. We can also hope that Ben Horne might mention the key to Cooper’s room to Hawk as well.

I had a little fear we’d have to wait another episode or so to find out what was the pages Hawk found. Perhaps because it seemed likely they had to be the missing pages from Laura’s diary made the confirmation happen sooner rather than later. Seeing mention of Laura’s dream with Annie Blackburn was amazing. This reinforces the idea that time passes differently within the Lodge. Could this be an explanation as to why Major Briggs’ body is so much younger than it should be?

One Reply to “Twin Peaks Season 3 Episode 7 Review–What’s Going On?”