“There’s some fear in letting go.”

This week’s episode of Twin Peaks had more of a hometown feel to it. There was more of a focus on the characters residing in town. More answers and updates are given, along with some surprises. There’s just three more episodes left after this, and the main players are starting to come together.

There will be spoilers for Twin Peaks Season 3, Episode 15.

ALL IMAGES COURTESY OF SUZANNE TENNER AND SHOWTIME.

Evil Coop drives to the old convenience store, and there’s a woodsman outside. They go up stairs on the side (above the convenience store) and flicker out of existence. It’s the room from the painting/dream Laura Palmer had (in Fire Walk With Me). He tells an electrician (different from the one seen in Phillip Jeffries’ dream) he’s looking for Phillip Jeffries. The Jumping Man is also seen. Mr. C. goes through a long hallway with trees flickering in the background. In another room are more stairs, like the stairway Gordon saw at the coordinates where Will Hayward met Major Briggs. Mr. C. enters another room and ends up outside a motel There’s a woman in a bathrobe outside and, speaking backwards, says she’ll unlock the door for him.

Jeffries has turned into some sort of giant machine/teapot? Mr. C asks why he sent Ray to kill him. When he denies it, Evil Coop asks if he called him five days ago. Jeffries says he doesn’t have his number. Mr. C. mentions they used to talk. He brings up 1989, when he showed up at FBI headquarters and said he met Judy. He asks, “Why didn’t you wanna talk about Judy? Who is Judy? Does she want something from me?”

Jeffries says, “So you are Cooper?” and tells him to ask her himself. Numbers appear in the smoke and he tells Mr. C he has already met Judy. Evil Coop isn’t sure what he means as a phone in the room rings. He starts demanding, “Who is Judy?!?” Finally, he picks it the phone and teleports to the phone booth outside.

Richard Horne is outside and points a gun to him. Richard says he knows he’s FBI. He saw him in a picture his mom, Audrey Horne, had. Mr. C. violently takes the gun from him. Tells him to hop in the truck and they’ll talk on the way.  Mr. C. texts Diane, “Las Vegas.” They drive away and the convenience store starts smoking and disappears.

Nadine And Her Golden Shovel

Nadine walks with her shovel to Big Ed’s Gas Farm. She tells him she’s changed, and she loves him. She’s been a “selfish bitch” all these years. She kept him and Norma apart because of her jealousy. He’s been a saint and gave up his love for Norma. She’s using the shovel to shovel herself out of the shit in her life and tells Ed to run to Norma. He’s free to enjoy his life.

Ed arrives at the Double R. He tells Norma he’s free, but Walter arrives. Walter still wants her to change the name of the diner to “Norma’s Double R Diner.” She wants him to buy her out. She’s willing to give up seven other successful diners and keep just the one. Walter agrees but thinks she’s making a mistake. Walter leaves the diner and Norma walks to Ed.

Ed says to Norma, “Marry me,” and they kiss.

Strange Times In The Woods

In the woods, a guy with a dog is walking (it’s Cyril Pons, played by Mark Frost). Nearby, Steven and his girlfriend are sitting by a tree. He’s rubbing his leg and has a gun. He’s either on drugs or having withdrawls. The guy with the dog walks up and she runs. Steven hides the gun. A gunshot is heard. Did Steven just kill himself?

According to the credits, Steven’s girlfriend is Gersten Hayward, Donna’s youngest sister (the one who played the piano).

At the Fat Trout trailer park, the guy with the dog tells Carl what he saw.

Trouble At The Roadhouse 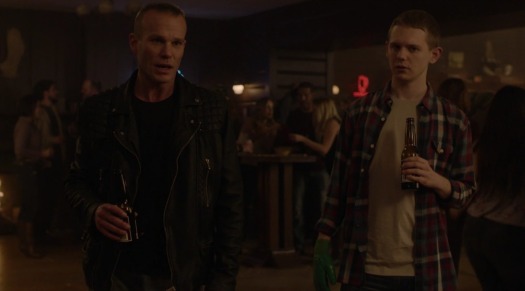 Unfortunately the punches were pretty lethal. The two guys end up in intensive care. James and Freddie are locked up at the police department. Chad, the drunk guy, and Naido (the woman with no eyes) are still in their cells.

Dougie’s House, Cake, And The Fork

Janey-E gives Cooper cake. It’s delicious. As he slowly eats, he tries turning on TV with the remote. There’s an old movie on. An actor says, “Get Gordon Cole.” This gets Cooper’s attention, and he pauses the TV. He sees the electrical outlet and starts crawling towards it. He sticks his fork into it. There’s a big zap.

The Log Lady calls Hawk. “Hawk, I’m dying. You know about death, but it’s just a change, not an end. Hawk, it’s time. There’s some fear. Some fear in letting go. Remember what I told you. I can’t say more over the phone, but you know what I mean from our talk when we were able to speak face to face. Watch for that one. The one I told you about. The one under the moon on Blue Pine Mountain. Hawk, my log is turning gold. The wind is moaning. I’m dying. Goodnight Hawk.”

Hawk says, “Goodnight Margaret.” He then says goodbye after hanging up the phone. He calls Frank, Bobby, Andy, and Lucy to the conference room. He tells them Margaret passed away tonight.

Other Things We Found Out

We had some happiness and sadness in this episode. Big Ed and Norma can finally be together after all these years. It was a surprise to see after 25 years, they still weren’t together. Let’s hope they finally get their happy ending.

It was interesting when Walter mentioned Norma not having family when she talked about selling the franchise. She said she did have family. There hasn’t been any other mention of Annie aside from when Hawk found the missing pages from Laura’s diary. The Missing Pieces on the Twin Peaks Blu-ray shows her taken to the hospital and waking up momentarily to recite her message to Laura right before the nurse takes the Lodge ring. Did she awake again after that or has she been sitting in a hospital somewhere?

The sad part was the death of Margaret. Sadly Catherine Coulson died shortly after filming her scenes. We’ll have to wait and see what her final words to Hawk mean.

The highlight was Mr. C. visiting the place above the convenience store. Seeing the room from Laura’s dream in Fire Walk With Me was crazy. Of course the big question aside from who is Judy is what the heck happened to Phillip Jeffries? We saw the Little Man From Another Place turned into an electric tree. Jeffries turned into some piece of machinery? That doesn’t really make sense since he wasn’t originally a resident of the Lodge. It could be a way to deal with the death of David Bowie, but we need serious answers on this!

Also, when Evil Coop said he was looking for Phillip Jeffries and they showed the Jumping Man for a moment, why was Sarah Palmer’s face superimposed on the Jumping Man’s mask?!? 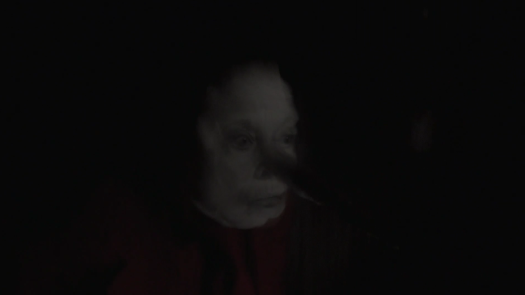 Could it be we’ll finally see the true return of Agent Cooper next week?!? Perhaps sticking the fork in the electrical outlet will be what it takes to fully wake him up out of his dazed state.

And who else wants a spinoff series with FBI Agents Randall Headley and Wilson?