Riverdale has been targeted by the deadly Black Hood. Fred Andrews and Ms. Grundy already have had run-ins with him. Last week, two students at Riverdale High stared down the barrel of his gun. Archie is determined to do something to protect Riverdale. Meanwhile, Jughead immerses himself into South Side High and faces other dangers there.

The Black Hood’s motives are about to become clear.

There will be spoilers for Riverdale, Season 2, Episode 3: “The Watcher in the Woods,” below.

The Black Hood came across Moose and Midge in the woods, doing drugs (Jingle-Jangle) and about to get involved in other activities. He shot into the car, but Moose’s body managed to shield Midge. Both survived the shooting with Moose ending up in the hospital.

Alice Cooper laters receives a package and letter from the Black Hood. He claims responsibility for Fred Andrews’ shooting, along with Ms. Grundy’s murder, and the shooting in the woods. He wants Alice to print the letter in the paper, stating he has targeted such people as an adulterer, a child predator, and sex-addicted teens. Included in the package was some personal items, including Fred’s missing wallet.

Alice takes the letter and items to Sheriff Keller and the mayor, but makes it clear she already plans on running the letter in the morning edition. Because of this, Polly has decided to leave Riverdale. She’s afraid for herself and her unborn child since her mom is baiting the killer. She plans on going to the farm where she and Jason had planned to go before his death.

Jughead adjusts to life at South Side High. The school has metal detectors, gangs, and drug usage in the hallways. He meets Toni Topaz, who reveals she’s part of the Serpents and invites him to hang with them at lunch. Jughead says he appreciates what the Serpents have done for him and his father, but he prefers to be a loner.

Jughead manages to convince the English teacher to allow him to work on the defunct school paper, which was shut down due to drugs and gang activity. Working late in a classroom to set up the paper’s office, he is attacked as he tries to leave the school. He tells Betty he fell off his motorcycle. Betty was worried another gang might’ve jumped . him. Toni reassures Betty the Serpents will have his back. Jughead thanks Toni for not telling Betty the truth, and the next day, he sits with the Serpents in the cafeteria.

Archie refuses to leave the threat of the Black Hood in the hands of the police. He feels none of them are safe and mentions the police couldn’t even solve Jason Blossom’s murder. Taking some inspiration from an old comic, he decides to form a watchdog group called the Red Circle. When talking to his classmates, he makes it clear they are not vigilantes. They are going to patrol Riverdale in order to watch over the students, staff, and parents.

One night Ethel is walking home, and a van starts following her. Archie and Reggie managed to get to her as the van drives away. Veronica’s dad later suggests Archie’s group become more proactive. They should hit back. The killer is using fear against them, they should as well.

Archie and the Red Circle film a video message. The guys are all shirtless and wearing red masks. Archie doesn’t hide his identity. He tells the Black Hood, “We will find you, we will hunt you, and we will end you.”

Veronica Vs. Her Dad 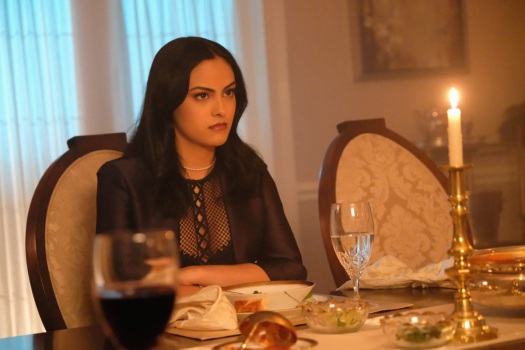 Veronica still isn’t sure if she can trust her dad. She tries having some friends over to watch a show in order for them to meet Hiram. He makes a quick appearance before he and Hermione have to leave for dinner reservations. Hiram does invite Archie over for dinner later.

Hermione warns Veronica about pushing things with her dad. This is a conversation Hiram overheard through the thin walls while he was in his study. He makes it clear to Hermione that she shouldn’t try to poison their daughter against him.

When Archie comes over for dinner, Hiram wants to have a man-to-man talk with Archie in his study while they drink some of the Lodge family rum. Hiram tells Archie he wants them to respect each other moving forward–no more sneaking into his daughter’s bedroom. He also makes a veiled threat if Archie ever hurt Veronica. After this, Hiram makes the suggestion that Archie and his Red Circle should go on the offensive.

Can Betty Save Kevin From The Dangers Of The Woods?

Betty is concerned with Kevin’s nighttime activities in the woods. He’s been going out “jogging” and hooking up with guys. She kind of looks down at his random hook-ups but is really afraid of Kevin running into the Black Hood. Kevin says he won’t go back but continues. When Cheryl sees Kevin heading out, she gets Betty and they confront him. Kevin lays it out how their lives are different. Betty has it a lot easier. If she can’t handle the decisions he’s making, maybe she shouldn’t be his friend.

Going out another night, he finds a guy waiting in a car. He gets into the car and is stabbed in the chest–but it turns out to be a scenario Kevin plays out in his mind. Despite the protest from the angry sex-starved guy in the car, Kevin runs home where his dad is waiting for him. Kevin tries lying and says he was at a thing with Betty. Betty had been there before looking for him. Sheriff Keller tells his son that with everything going on in town, he needs to know that he’s safe. There may have been things they don’t usually talk about, but perhaps it’s time they start.

The next day Betty sees Kevin in the hall by his locker. He looks at her and walks way.

Archie is playing with fire. It’s great he wants to help protect his friends and family, but he’s also calling out a killer. Seeing as how Archie is being influenced by Hiram Lodge, it makes Veronica’s dad all the more creepy and slimy. Hiram is not a nice guy. He’s been making casual threats left and right. If Archie manages to help put away the Black Hood, he’ll still have to worry about going up against Hiram.

Jughead’s decision to continue going to South Side High is interesting. While it allows us to be introduced to Toni Topaz (from the comics) and other Serpent members such as Sweet Pea. Jughead is determined to make his own way in life and quickly learns he might be in over his head. Hopefully there won’t be any romantic tension between Jughead and Toni since they’ll be spending school days together as well as working on the school paper. 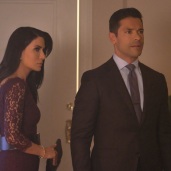 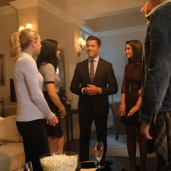 This show hasn’t missed a beat so far this season. The threat of the Black Hood along with Hiram Lodge and Jughead’s misadventures is moving the show along at an enjoyable pace. Moose and Midge may have gotten off easy, along with Kevin, but that’s okay. We don’t need to see too many characters killed off in just the second season, and this isn’t a slasher show. This is a series I look forward to week after week. It’s so nice watching a show and not having any idea where it’s headed. You also have to appreciate the little nods, such as the Red Circle comic, that lets us know the show remembers its roots, despite all the crazy changes and twists.