Captain America has had a tough year. Readers and citizens in the Marvel Universe were shocked to discover Steve Rogers had been secretly loyal to HYDRA his entire life. Through a series of carefully laid strategic plans, he managed to take over the United States in the name of HYDRA.

Of course, this wasn’t really Steve Rogers, but a dark version created by a misguided sentient cosmic cube who, at the time, looked up to the Red Skull. Needless to say, Captain America managed to defeat this darker variant and his Secret Empire in order to reclaim his identity and save the day.

Cap will have to work hard to regain the populace’s trust. Creators Mark Waid, Chris Samnee, and Matthew Wilson plan on helping him with that mission, beginning in Captain America #695. 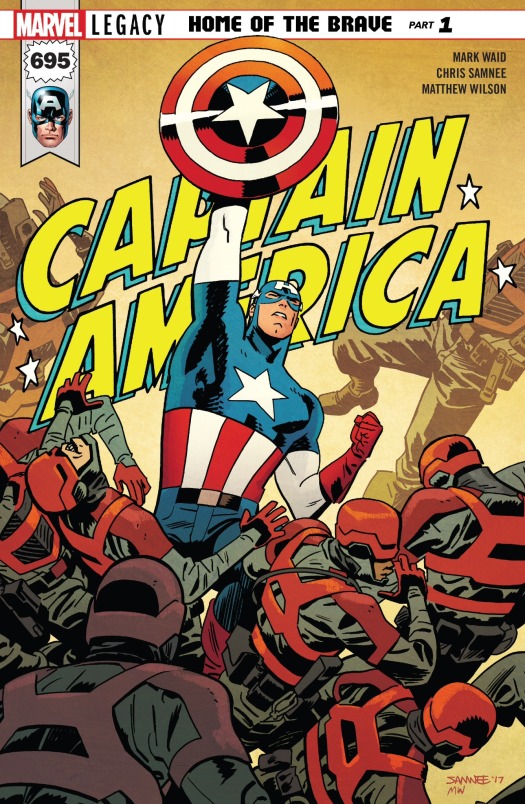 Waid and Samnee have established themselves as a stellar writing team. With Samnee’s art and Wilson’s colors, readers have been treated to incredible visuals as the team fleshed out their take on characters such as Daredevil and Black Widow. Now it’s Captain America’s turn to get this creative treatment.

Steve Rogers’ recent fall from grace means he needs to win back the trust of the Marvel Universe, as well as that of readers. Waid and Samnee jump right in with this task. As Captain America attempts to find his place in the world, the result is comic book filled with true heroism. Cap has always been a character who immediately enters a fray without giving it a second thought. Winning a battle against incredible odds has always been what he does best. When he puts on his classic costume in this issue, it’s clear we’re in for a treat and the enemy is about to get a beatdown.

Captain America has fought some of the most powerful villains in the Marvel Universe. He even stood up to an Infinity Gauntlet-wearing Thanos without batting an eye. For this creative team’s first issue with the character, one might expect Marvel to unleash their biggest guns against our hero, but that isn’t the case. It isn’t necessary. This is a comic about Cap being the hero we all know he can be. This is a great way to start a new direction for the iconic character trying to re-establish who he is. And if the little speech he gives in the issue doesn’t stir up some emotions, I’m not really sure what to tell you.

As expected, Samnee and Wilson’s art and colors are glorious. There’s a special kind of elegance and grace in Samnee’s art. The action is straight and to the point. When Samnee draws Cap, it just looks like a true depiction of a hero. Wilson’s colors bring it all to life with vibrant shades and a nice feeling of warmth. I won’t lie, I couldn’t help but read this issue three times in one sitting.

Captain America #695 begins Steve Rogers journey in restoring his besmirched name. Mark Waid, Chris Samnee, and Matthew Wilson are the perfect creative team to help make that happen. With a tale that focus on the story over flashy bells and whistle, we get a superb showing of why Cap is one of Marvel’s best and noblest heroes. This creative team has previously delivered fantastic stories with other characters. It’s going to be excellent to see what what they have planned. We know Cap will be fighting a new Swordsman as well as Kraven the Hunter. Captain America fans have a lot to look forward to.