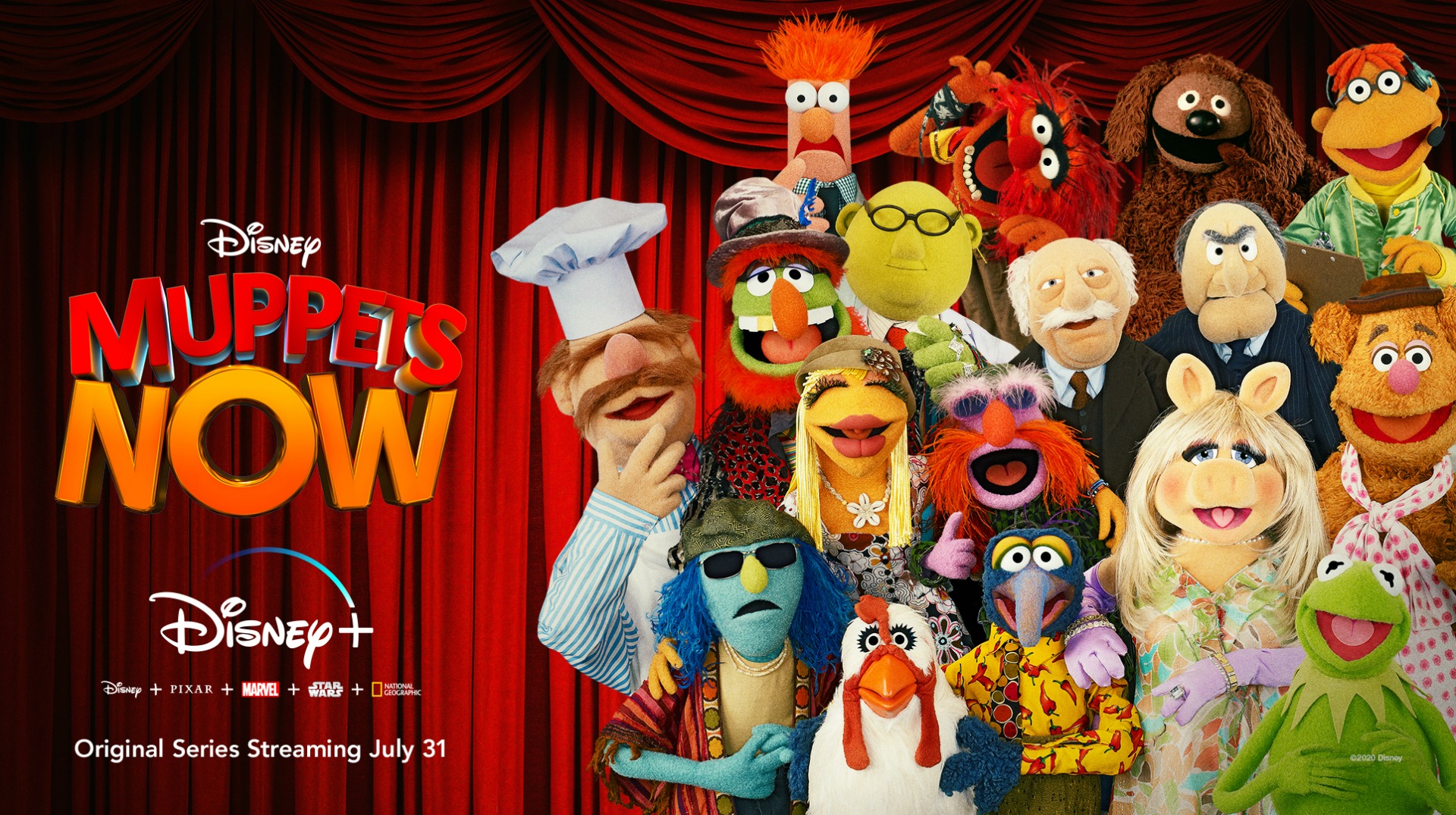 We all could use some Muppets in our lives. Things have been a little bleak and dreary with the pandemic, self-quarantines and abundance of almost daily bad news. Muppet Studio is unleashing a new series just in time to entertain and distract new and old fans.

(All images provided by Disney).

In the original Muppet Show, Scooter was the backstage manager who made sure the show ran as smoothly as possibly. In Muppets Now, Scooter once again has the crucial role of making sure the show full of content. Each episode consists of different segments which are uploaded by Scooter onto the Muppets Server. He is often called or messaged in between the segments we watch as they are uploaded. There are special celebrity guests on each along with some guests making reoccurring appearances.

Here’s a rundown for the first four episodes. There will be some minor spoilers in terms of the special guests!

We first see Kermit video chatting with Scooter and learn the format of the show. The first segment is Lifesty With Miss Piggy. (It’s supposed to be Lifestyle but there was a typo on the graphics card). Taye Diggs seems to be a permanent guest on the show. Miss Piggy also has a Le Chat segment with Linda Cardellini a reoccurring guest. The second segment reveals a special skill of which Kermit is an expert. Walter the Muppet attempts this special talent. Swedish Chef has the Okey Dokey Kookin show (but spelled with some Swedish letters/characters I don’t think I can replicate with my keyboard). Beverly Plume (the turkey) is the host. Swedish Chef competes against Carlina Will. The final segment is Mup Close & Personal. Kermit attempts to interview RuPaul, but is constantly interrupted.

In the second episode, Fozzie is constantly trying to pitch new segment ideas to Scooter as he uploads this week’s. The first segment is Pepe’s Unbelievable Game Show. Two human contestants attempt to compete on a show where Pepe seemingly makes up the format as with whatever idea comes to mind. In the cooking segment, the Swedish Chef competes against Danny Trejo’s mole tacos. Dr. Bunsen Honeydew and Beaker have a Muppet Labs Field Test segment about burning and melting objects after Joe from Legal, an otter, warns viewers not to try it at home. Miss Piggy has another Lifesty segment (with Taye Digges and Linda Cardelinni) focusing on health and fitness.

Joe from Legal interrupts Scooter as he begins uploading this week’s episode. He says they need to complete an audience survey–which consists of Statler and Waldorf. Sweidsh Chef is up first in a cooking collaboration with Chef Roy Choi. Swedish Chef isn’t too happy in an assisting role (he was given the simple task of making the rice). Muppet Labs Field Test looks at velocity and uses a slingshot contraption and pizza in a parking lot. Missy Piggy talks about relationships. Pepe’s Unbelievable Game Show begins with the Lightning Round. Statler and Waldorf said the episode met their expectations. They expected it to be lousy…and it was.

Scooter has been awake for 36 hours straight and needs to try to keep from falling asleep because this week’s segments need to be uploaded. He video calls Animal to help keep him awake. The first segment is Mup Close & Personal with Miss Piggy as the host interviewing Aubrey Plaza. Muppet Labs Field Test explore sound. Swedish Chef competes against Chef Giuseppe Losavio. Lifesty With Miss Piggy deals with affirmations and taking away self doubt.

Muppets Now is off to a good start. The show is targeted towards families or younger viewers. It contains the traditional Muppet humor you would expect to see. Some segments and characters seem to work better than others. Obviously, it could be a matter of personal preference. For example, don’t tell Miss Piggy, but I get a little tired of seeing her all the time. The human contestants on Pepe’s game show is an interesting decision. It almost comes across as a little awkward. I’d almost prefer seeing other Muppets who don’t have their own segment compete.

While the show focuses on Miss Piggy, Pepe, Swedish Chef, Muppet Labs, Scooter, and sometimes Kermit, there are a lot of fan-favorite Muppets that haven’t appeared in the first four episodes. Perhaps social distancing and quarantines have limited the appearance of others. I mean that as a bit of a joke, but it’s maybe possible that did play a role, depending on when production took place.

By far, the best part was Danny Trejo’s competing against Swedish Chef. I actually went back and rewatched just that part again. I never expected to see Trejo and Swedish Chef have a face off over who has a better mustache. Danny’s tacos looked really really good too.

The six-episode season is a little concerning. This could be a test to see how much of a demand there might be. With each episode, the show is finding its groove. Hopefully we will get more episodes soon and see other Muppets appear and “contribute” to the segments.

If you’ve been wanting more Muppets in your life or are looking for some pretty wholesome entertainment for the family, Muppets Now has your back. Each 23-25 minutes of episode moves quickly enough to engage those with shorter attention spans and is likely to bring a smile to everyone’s face. It’s great seeing the Muppets as well as observing some minor evolution and changes in the characters. For example, are you wondering what the status of Miss Piggy and Kermit’s relationship is? You’ll have to watch Muppets Now to find out.